We began our second day of Tarshar Marshar Lake trek, at Lidderwat camp with a cup of hot tea. Today’s plan was to leave the Lidderwat camp and to reach early at Shekwas Camp. We were up today before the Sun rose from the east. Since we still had time for our breakfast to be prepared we went west towards the banks of the River Lidder. The sound of water rolling and crashing against the huge boulders was really deafening. There was a huge patch of fir and Pine tree forest on the other sides. Some 15 minutes into our foray, we saw at a distance our horseman, gathering mules for our onwards journey. We caught hold of him and while he was preparing his horses we had a friendly banter. Among the many, the ghost stories of Lidderwat forest was perfect tea time story for our banter.

We reached back straight to our camp site and to the kitchen area. Had a satisfactory breakfast comprising of a simple diet of  a plate of bread omlette, 2 boiled eggs and oats. Packing our bags and rolling our tents we began our ascent trek, high up on a northwardly trail. The trail was an easy, but the inclination and of course, the heavy breakfast dragged us down.

The patchy yet a lovely section of the trail opened up to a dense fir tree forests. The whooshing of the River Lidder and the psithurism of the trees was salubrious. The vastness of the mountain ranges was just just adding up to the already tranquility. Our tired body rejuvenated on this sight of the overlaying vast green vista, right before us. Some 2 hours hence we reached the Shekhwas campsite.

As far as we can see the grasslands after Shekhwas camp merged with the towering snow folded high mountains. The valley seemed to be no longer a single valley but of many valleys that converged together to form one. The trail ahead led us past few of the Bhakarwal or the shepherd shelters. The picture perfect undulating meadows on our left reached high up out for the sky. Beyond those meadows,  tall grasslands, the snow-patched mountain caps shadowed the whole landscape. We stopped at one of the Shepherd house where our guide said to get the best tea made of Goats’ milk. The taste of the goat milk’s tea was simply out worldly.

It was a pretty sight for us to reach the Shekwas Camp. It happened to be our camp for the day. But, since we had few more hours at our disposal, we all four mutually agreed to stretch a little further to reach Tarshar lake camp. The whole idea behind was to save a day from being spent at Shekwas. We also knew to reach Tarshar camp we will have to go on further up for another 4 hours or 5kms distance from Shekwas camp. But the temptation and excitement of reach early to the banks of Tarshar lake  made us to absorb the heavy toll to our body. And we agreed on moving ahead.

The trail further up from Shekwas camp site, rose rapidly as a conical hill. Topping a few false mountain ridges, each opening up to different wondrous sceneries. After a rather monotonous and tiring five hours later, we got the first glimpse of the Tarshar lake. This faint and a slight glimpse was much a delight to us. We all felt a sudden rush to reach the shores of the lake. Still we were a straight 1 hour distance away, with the sun rapidly setting down.

We reached the Tarshar lake camp dragging all up to the northern side of the the lake. We then helped our guides and support staff to pitch in our tents. And once, after our evening snacks were served we could not contain our excitement and we simply made a dash to the banks of Tarshar lake. With the last and rapidly fading evening orange light we had our first glimpse of the surreal Tarshar Lake. 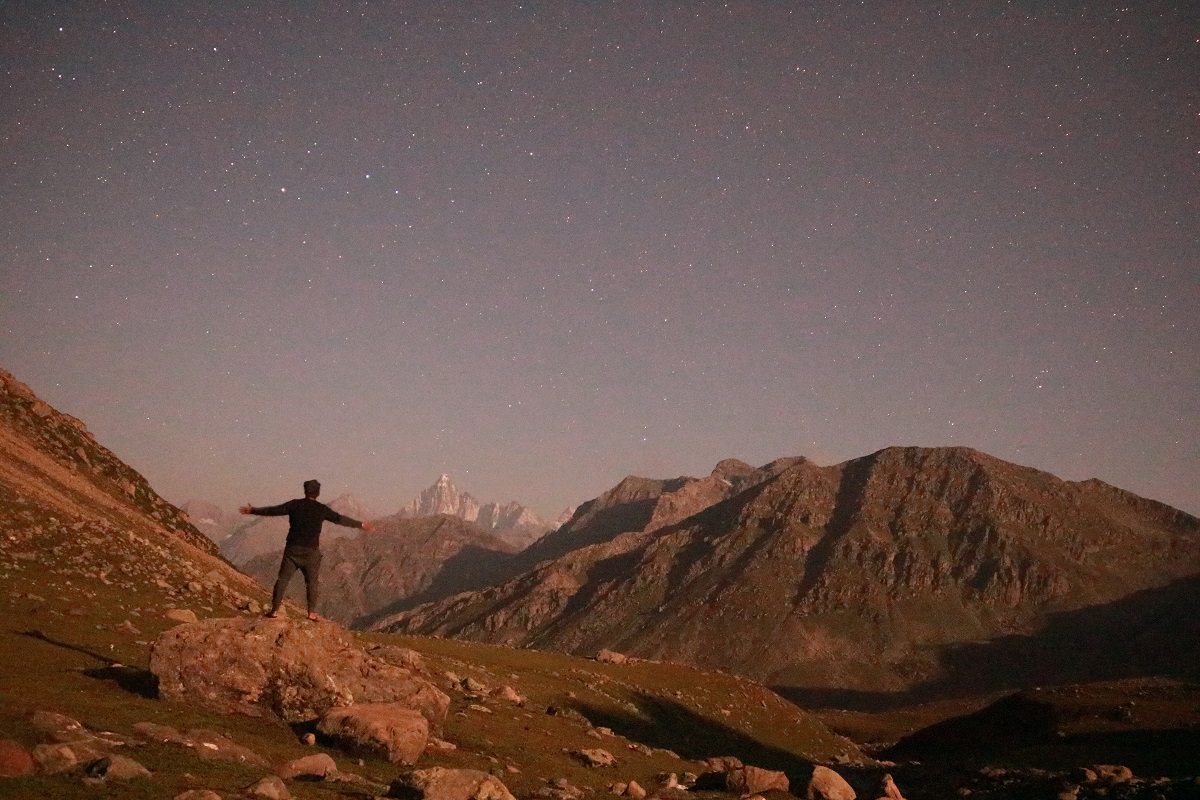 Dead tired and with frozen feets, we reached our camp site,pitched along the bank of Tarshar Lake. The dinner was served and we called it a day. Our warm tents and cozy comfortable sleeping bags made all others to hear our high pitched rhythmic sound of us, snoring.

What an exhilarating  day to start with. Peeping just outside our tents was the shores of the turquois blue Tarshar lake, all glimmering under the morning sun shine. My friends were simply brimming with all the excitement, blabbering all there excitement with no meaningful sentences to comprehend. We would have spent another 2 hours around the bewitching beauty and picking a tons of memories.

We didn’t want to leave the heavenly beautiful Tarshar lake, but further up amidst the permanently snow capped mountains lies, yet another jewel of Kashmir valley, namely Marshar Lake. The initial climb up was really tough where the ascent of the climb was just getting steeper and steeper. Breathing heavily and with sweat it took us some 1.5 hours to reach the top of the mountain ridge. From a vantage point  we had the unhindered panoramic view of the Tarshar Lake, below. The sight was a worth for all the pain undertaken to reach there.

From there we could see a trail with a steep descent and a small water body far away where our eye sight ended. Our guide notified us of our next camp site which was high up near the water body. Still an hour of steep descent was left and thereafter another 2 hours of hike on a gentle gradient valley area.

Our Camp site from a distance. The steep descent sipped up all our energy juice and the fiery hot Sun above, provided no respite. Munching on our food reserves and refreshing ourselves with glucose drink we covered the most part of our distance. The land turned marshy after we crossed the water valley at its narrow point. We reached our camp. And we were surprised by the hot maggi noodles and pop corn to munch upon to wade off our tiredness. Resting our sore feets and after having our hot dinner, we spent rest of our remaining night under the starry sky, passing some silly jokes on each other.