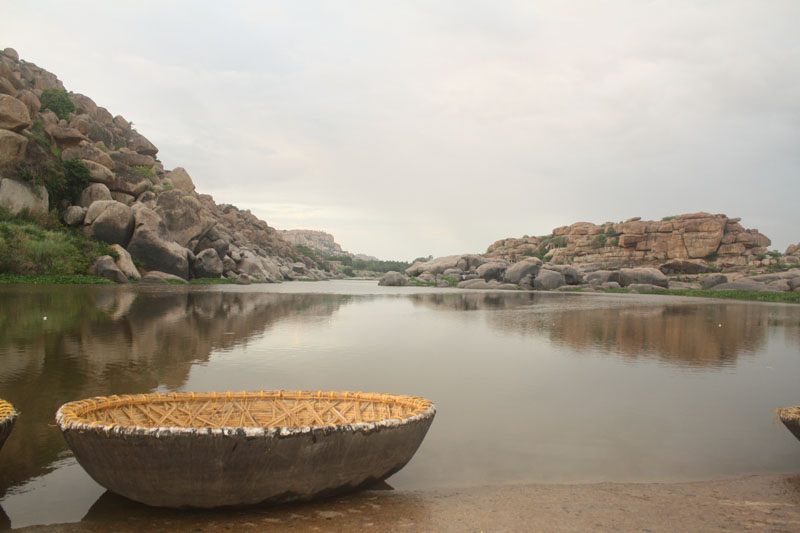 Keeping in mind the upcoming long weekends along with an old friend of mine, I planned for a trip to Hampi with a three days itinerary. We two backpackers, agreed on travelling on an unguided tour to Hampi. We two left from our respective locations and meet up at the Hosapete station, which is the nearest town to Hampi, with railway connectivity.

Train journey from Pune via Huballi to Hampi

We reached Hosapete railway station from our respective cities as per our agreed dates. After having a decent Idli wada , a typical Indian breakfast we took a shuttle bus from Hosapete to Hampi. On way the sight of plush rice fields on both side of the roads and the morning freshness was simply exhilarating. The 13 kms journey and after some 40 minutes of bus ride we reached our destination, Hampi. 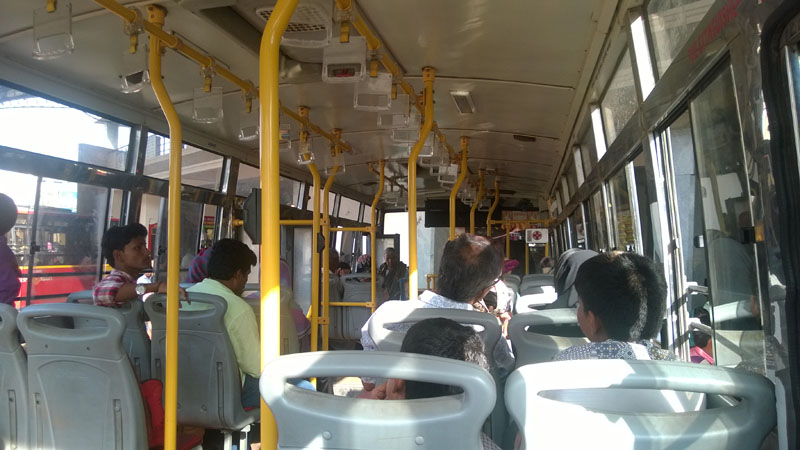 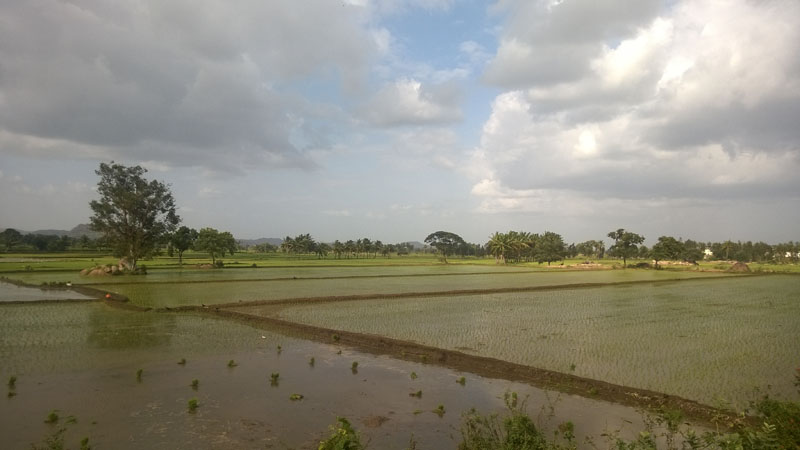 We alighted the bus at the Hampi main bus stand and we witnessed the jaw dropping sight of the 165 fts high and nine storied Gopura of Virupaksha Temple. Since we arrived early at the bus stop and there was no rush in the roads heading to the temple we decided to head straight to the Virupaksha Temple. On way, I bought a small map of Hampi from a street side book seller. It was fun walking on the wide and empty roads to the temple. While walking we chalked out our day’s plan to visit this enthralling place called Hampi. 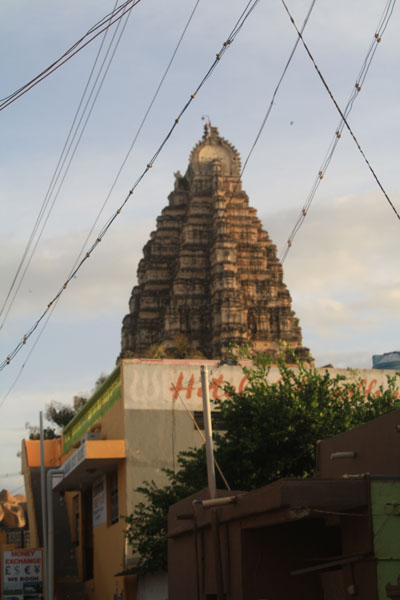 View of Virupaksha Temple from the Alleys of the main Market

“Hampe, what’s now been popularly called Hampi used to be the capital city of the ancient Hindu empire of Vijayanagara, who’s rulers ruled it till 14th century AD. On the banks on river Tungabhadra Hampi, during its prime was once the richest and largest cities in the world. With time much of its glory and wealth, went down into oblivion. Treasures looted out and city turning into ruins,it’s past shinning history was all lost under the realms of time. With much efforts of its local people and government the past raised from the ashes and in current days this town and its group of temple complexes have got recognized as a UNESCO World Heritage Site.” 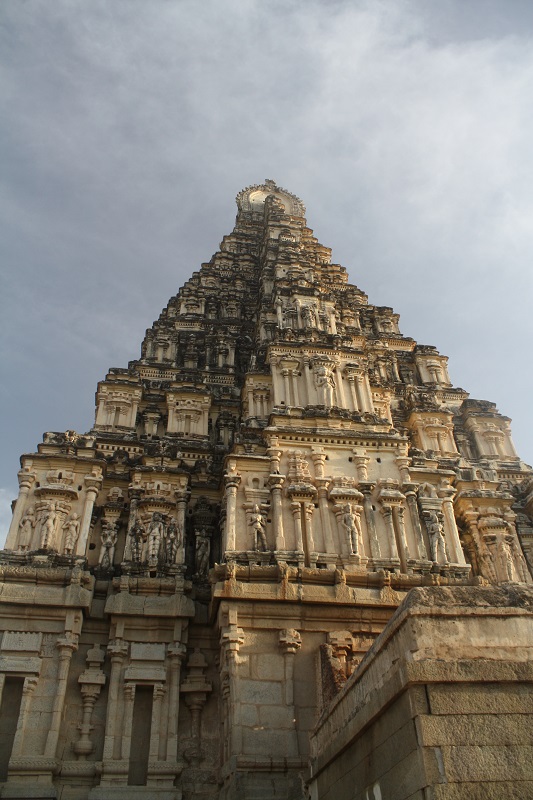 Mesmerized by the Sheer 165 fts size of the main Gopuram

The Outer courtyard leads to inner, main courtyard. There is a small nominal entry fee of Rs 10 per person to enter the inner courtyard and the main Temple. The second Gopuram, though much lower than the first, has sculptures in the bays of the upper tiers. 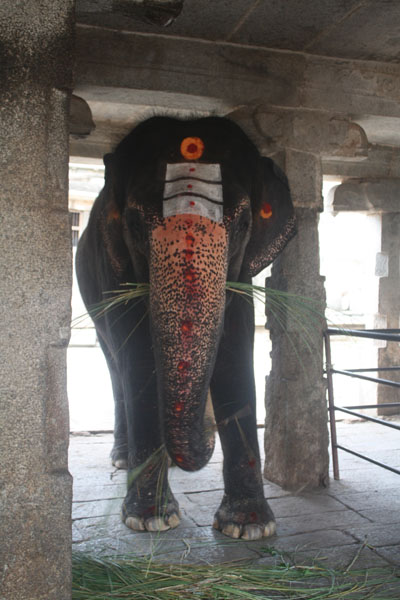 View from the Inner Courtyard looking towards the Main Gopuram

The main temple complexes was huge and its inner ceilings were painted mostly in red, with stories from many folk tales. The pillars of the main temple complex are adorned with sculptures of a mystical creature called Yali. The prominent feature of this mystical creature, Yali is it’s stylized body of a lion and the head of some dragon like beast, with a trumpet like appendage of a elephant. 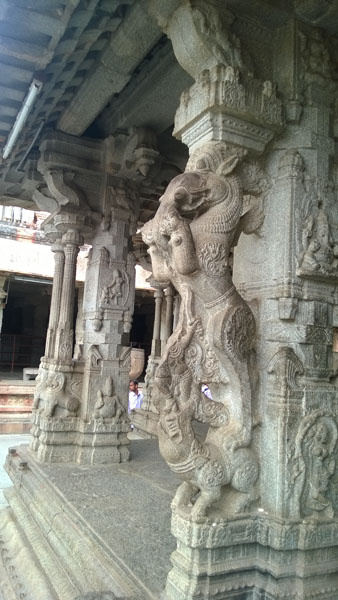 The sculptures of Mystical creature, Yali on the pillars

After having the darshan of the main deity, Lord Shiva we took a small pathway to the right, that took us to a small rooms. A group of tourist were being detailed by probably a guide on the inverted image that can be seen on the wall of the room. The wall of the room has a small hole from where the light coming inside transmitted an inverted shadow image of the main Gopuram on to its opposite wall. This simple technique is otherwise known as the pin hole camera technique. We were intrigued by the marvelous architectural dexterity and the knowledge of pin hole technique of the architects of this temple who envisioned the pin hole camera technique even before the western world could have known of this . 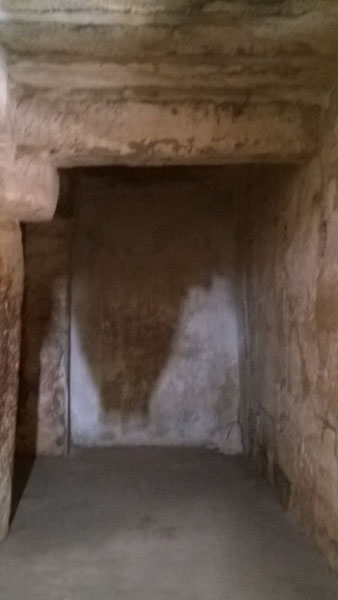 The inverted shadows of the main gopuram

We came out of the temple complex via north side exit which had a huge water tank called Manmatha Tank . Walking further on we reached the banks of the Tungabhadra river and the bathing ghats. We spent few minutes on the banks of the river. 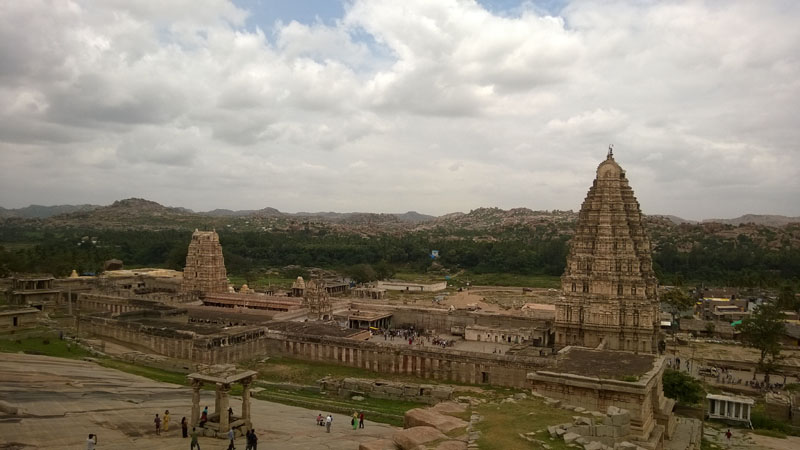 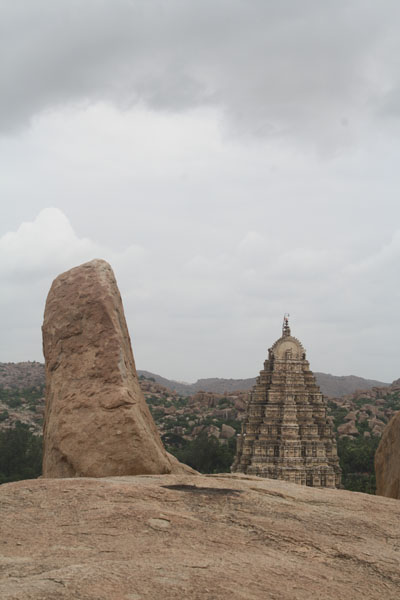 It was already noon and were very hungry. We checked-in to a nearby Vegetarian restaurant named Mango tree .The menu of the restaurant was quite varied with Israeli and French food on its menu along side the north and south Indian food menu. We ordered South Indian dishes for ourselves . Wow !! What a food !! I would highly recommend to my readers to try out the food varieties available in this restaurant esp The mango Lassi. 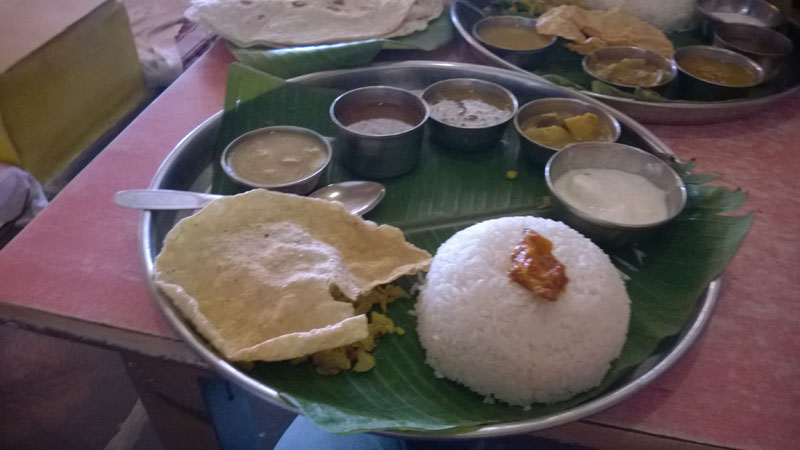 After filling up our hungry tummy we moved on towards the Main Bazar area in front of the Virupaksha Main Gopuram. We hired two bicycles for ourselves, to commute around the town. Since Hampi is quite a vast area to visit, the cheapest way to commute around Hampi is definitely on these hired bicycle .There are many shop near the restaurants around the temple who provide bicycle on hire. With Rs 300 a day it seems the cheapest means of transportation around Hampi . Another reason is you can enjoy the place at your own pace .

The straight road ahead lead us on a wide roadways passing through the market having a series of old pavilions on both sides. During the glorious days of the Vijayanagara Empire, this place was once a thriving market where traders from world over would land to trade, on Silk, precious gems and exotic cloths . It was also a market where cattles and horses were also traded. Though the market has lost much of its golden sheen and significance of its bygone years, it is still a popular place to visit among the many tourists. 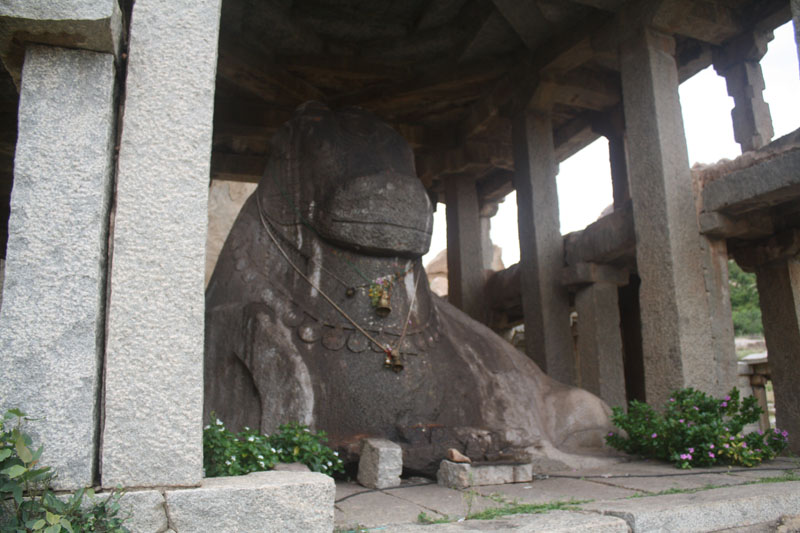 Nandi Bull at the end of the market place.

The staircase, behind the Nandi bull leads up the hill to the heighest point of Hampi, called the Matanga Temple  .It took us around an hour in the hot and humid climate. The place was very windy and brought respite to us in the hot and humid condition.The porch of the temple provided a vantage point from where the vast expense of Hampi could be seen miles and miles away.

The rocks balancing each other.

The vast expense of empty Bazar Area of Achyutaraya Temple.

After spending some hours we took a detour on the same route downhill and made back to the base of the hill. From there we crossed over stonned boundaries to reach the ruined Achyutaraya Temple. The temple, totally now in ruins was not so grand as Virupaksha temple ,but it’s architecture was marvelous.

Strolling for the next half hours we walked another kilometer to reach the Vitthal temple, after crossing the King’s balance. The King’s Balance also known as Tula Bhara or Tula Purushadana, was used by the king to weigh himself with gold, gems, silver and precious stones which he used to distribute to the priests of the temples during special ceremony seasons during solar or lunar eclipses. 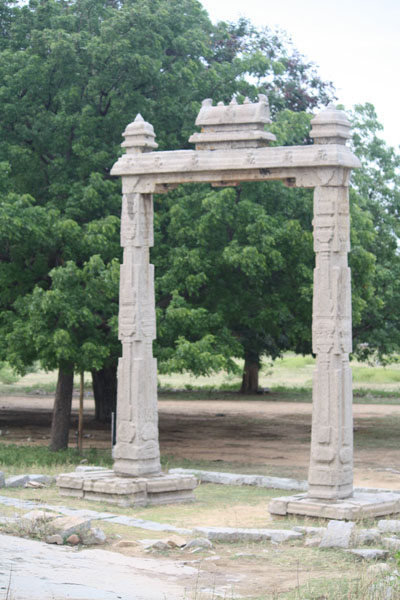 Passing on the King’s balance brought us to the Vitthala temple which has the world famous stone chariot in it’s premises. Though called as stone chariot, but in contrast as the name suggests, it’s a shrine built like a chariot. It appeared more like a monolithic structure which in reality was a stone shrine built with many giant granite blocks. The joints present there were smartly hidden in the carvings and other decorative features that adorn the Stone Chariot seemed to have long lost. Time has played a very cruel part on these mute stones. Battling centuries of neglect and incessant natural forces acting on it the Chariot has stood its ground but much of its upper dome stands missing today . 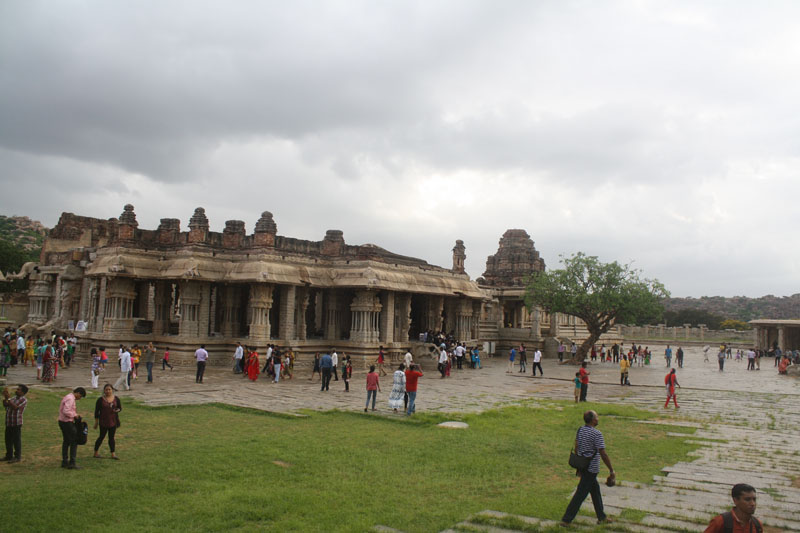 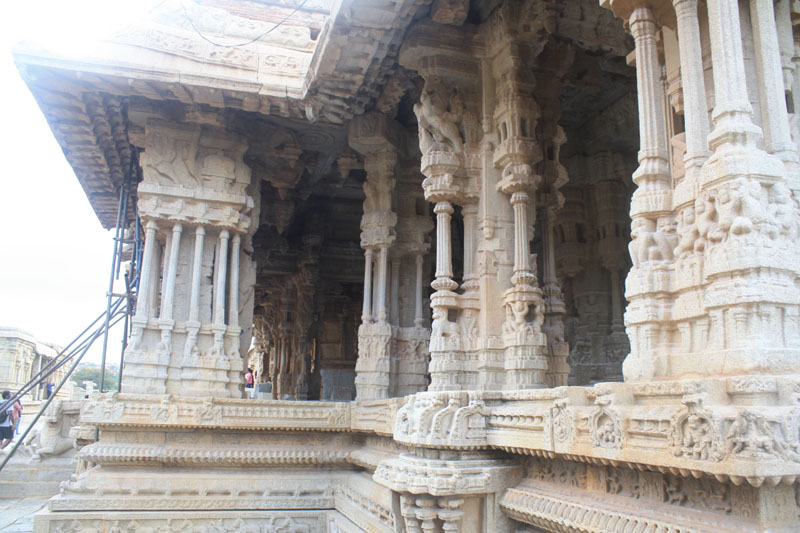 Intrinsic carving on the eastern Gopuram of Vitthala temple. 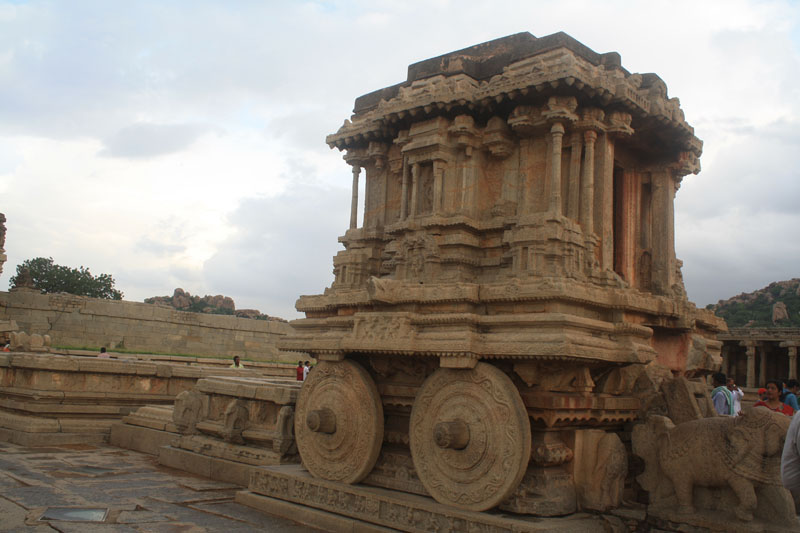 Stone Chariot,as can be seen today

Stone Chariot, Then back in 1856. Image copyright – Alexander-Greenlaw .

Sun was setting in , and it was getting dark . We took the path that headed straight to the paved gravel walkways ,by the river bank . 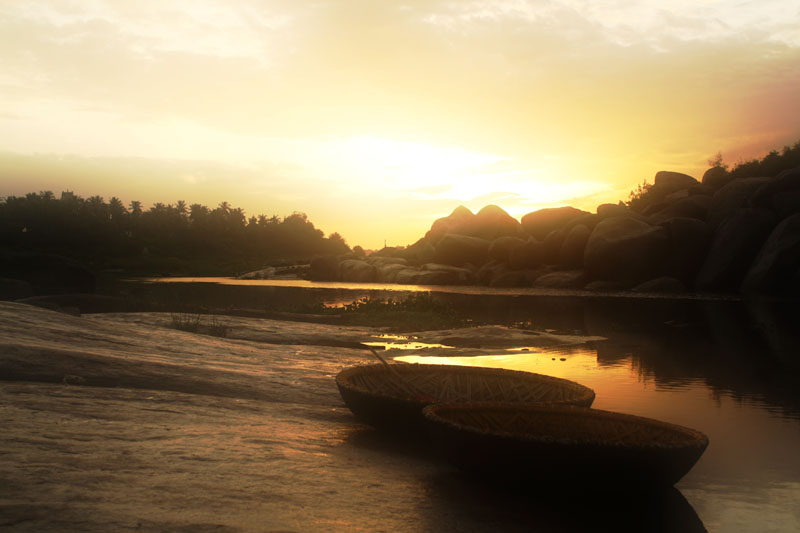 The rocky barren land took a golden hue under the rays of the setting Sun . I don’t remember how long we sat on top of the old rusted hill near the river banks, watching the sun melting on the horizon .It was a wonderful day. And before calling it a day, to add vigor to our tired up leg muscle we had a small party before heading toward our guest house.

Please read my part 2 of this blog which is a continuation to our adventurous day at Hampi.