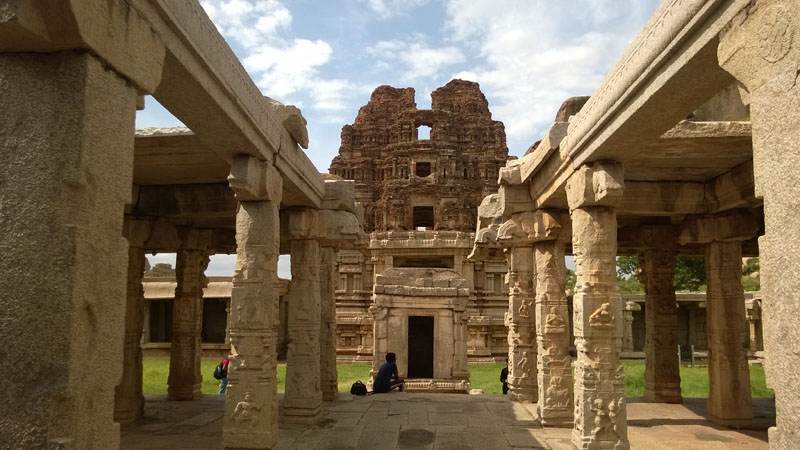 To read on my previous Day’s adventure at Hampi please click the following link A Backpacker’s travel guide for, Hampi : Part 1.

Hampi’s rich, fascinating history dates back to thousands of years. With its unearthly landscape of boulders and innumerable ruined temples and palaces, makes it a topmost attraction for tourist from all over the world. Here is my detailed description of our second day’s adventure while Hampi-ing.

Day 2: We started on a high note and with the hangover from yesterday’s late night party. Still writhing like a Anaconda on my bed, I peeped out of my duvet . The Sun’s rays were piercing through the hotel room’s curtains and on to my face. Time must have been around 7am .

I was about to drag myself off the bed, Shudi came in to my room yelling on top of his voice “We have to detoxify ,man !!!!”. This totally destroyed my leftover sleep. Half awake now and grossly irritated by his untimely yelling and shouting, I yelled him back and questioned “….and how are we going to do that,A**#**e?”

Shudi, my friend even if he has always been a lazy ass in our group but he has been bestowed with a unique talent of having his wittiest answers ready for every question asked to  him. He jumped to my cot and rolled down my duvet and said “By getting our undies soaked in the cold waters of river Tungabhadra . Lets go for a swim ,man ! Adventure is waiting !!. It was a great plan and was a  necessary for the hangover was pincing me.

In no time we left our hotel and off we went to the bathing ghats of the river. The ghats may be now some 50m away, but out excitement had no bounds. We quickly undressed ourselves down to our undies and took a plunge into the river. Man it was cold !!! At a distance we saw, the temple Elephant Lakhmi  with her Mahout. 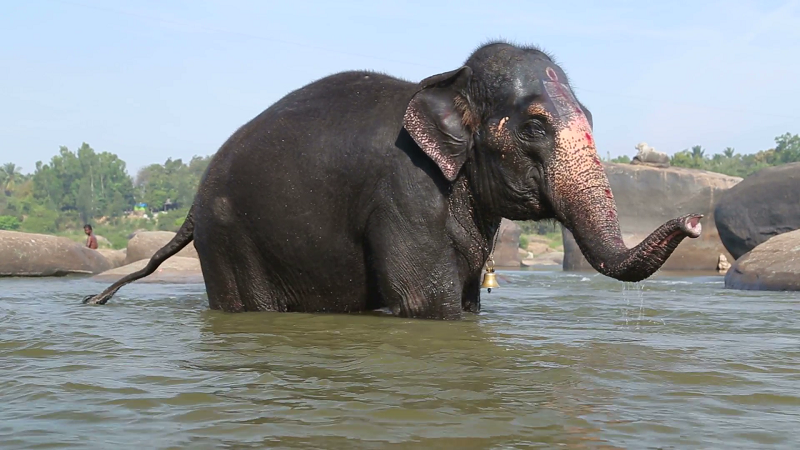 After a refreshing time swimming across the river ,we completed our first task of the day .My head surprisingly seemed to have got a little lighter after the bath i.e no more hangover .LOL !!! We headed straight to our usual hanging ground, the Orange restaurant . Surprised to see the restaurant door’s were closed with board hanging –‘Only Lunch and Dinner available here’. By then we were damned hungry and our dehydrated body need food and water.

We briskly walked around the corners of the market area and found a decent food joint nearby, which was serving  Idli with sambhar and some other items like dosa and Vadda. My eye got fixed on my Idli wada sambhar plate that I ordered from the food counter and my buddy was seen savoring dosa and payesum. After the satisfying breakfast ,we had a cup of cardamom tea. The cup of tea must have kick started our brain’s dead synapses for it felt like vigor has again returned to our hangover laden body.

Nearby cycle shop was our next stop. We hired two cycles for Rs 350 each and went back to our hotel. After finishing packing our bags we went on the streets of Hampi for our 2nd day of Hampi tour. We took the up climb road from the Virupaksha Temple, towards the Urga Narashimha Statue .

Even if the Sun has now reached high up on the sky, the freshness of morning air was still hanging. We were simply leisurely pedaling our bicycles and enjoying the roadside view of the banana farms that flanked us on both sides.

Then suddenly there out of no where two Israeli Ladies whisked past us with double of our cycle speed. They simply zapped passed us. Silly gals that the word I uttered to Shudi. Our latent biker spirit’s ego, sported up and we were seen cranking up our cycle’s speed. Man, we were simply blazing the road Those ladies too might have sensed the upfront challenge. They were frantically paddling their cycle. We were in a race now. Do or die situation !! Then suddenly something happened, My cycle’s chain got disengaged and i was off the race. Seeing this Shudi slowed down and showed them a thumbs down. The competition was neck to neck and we would have definitely won, if the chain would not have disengaged. The ladies silhouette faded in the distance.

Few distance and some time later we saw a signboard showing the way towards the statue of Urga Narashimha. We parked and took to walk on the unpaved road leading to the statue. The statue seemed huge and was very artistic . Though much of the statues’s parts have been destroyed by the invaders of the past. The snake hood and the protruding eye of the Urga (meaning angry) Narashimha deva are the main highlights. 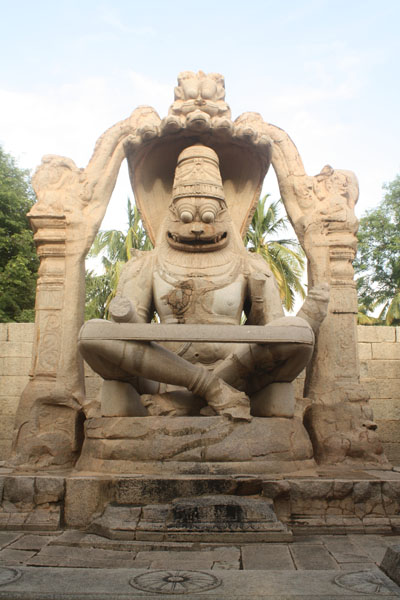 Besides the Statue of Ugra Narashimha , few feets away we came across a Huge Monolith Shiva Lingam named Badavilinga. The details of on board outside the caged corrider said this Shiva’s Linga to be the largest Lingam in Hampi. The linga was immersed under  waist full of water and whatever part of the linga seen outside of the water made us wonder on it’s mammoth size. We paid our reverence to God Shiva. 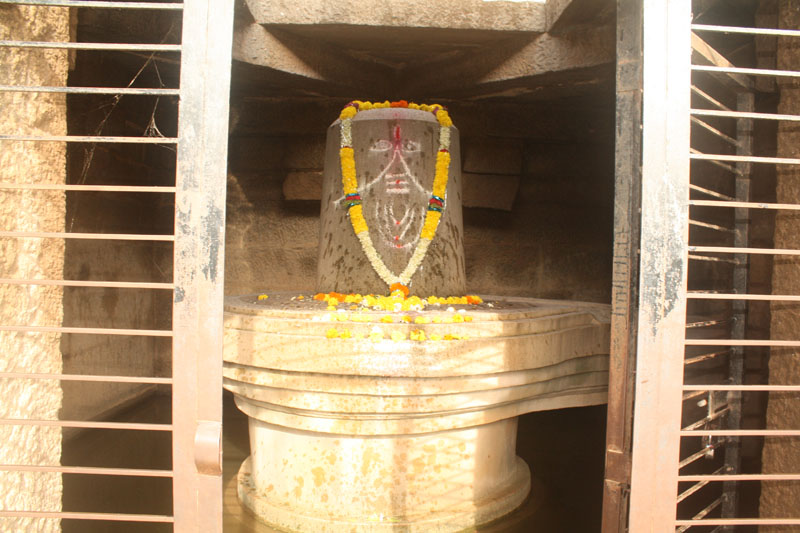 We hopped on our bicycle again and must have spent another 10 minutes on the road, we came across another temple complex. By its name it is named as Prasanna Virupaksha or Underground Shiva Temple. The archaeological department’s detailed it to be as one of the oldest temple of Hampi. Lack of maintenance and water flooding into the inner sanctum area made it less accessible. The temple was wholly taken over by the bats. One on the outside temple has a huge monolithic stone with craving with early scriptures dating back few hundred year. 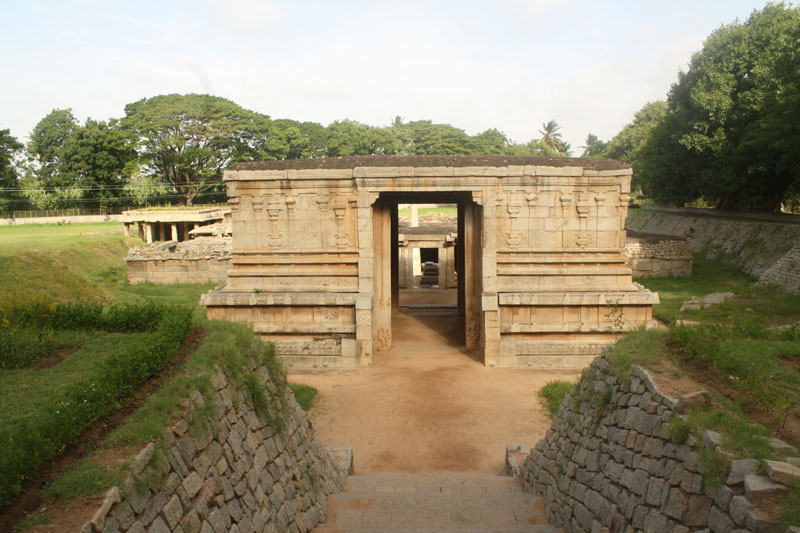 A Tablet with scriptures

We paced again on the main road. The tarred road gave way to unpaved roads. From a distance further up we could now see the some watch towers like structures. We have now reached the Hazara Rama Temple. This temple is dedicated to Lord Rama, a Hindu deity. Not sure how and why this temple was so oddly named. Probably hazara means here Thousand (not sure) .But it was a wonderful temple with its walls depicting the stories from the epic, Ramayana. The temple has a sprawling lawn around its courtyard. Two huge gateways gave access to the inner temple complex. The interior of the temple are ornately and intrinsically sculpted columns. The most fascinating were the sculptures made on the surface of the black pillars which even after so many hundred years were still shining pitch black. Simply amazing!! 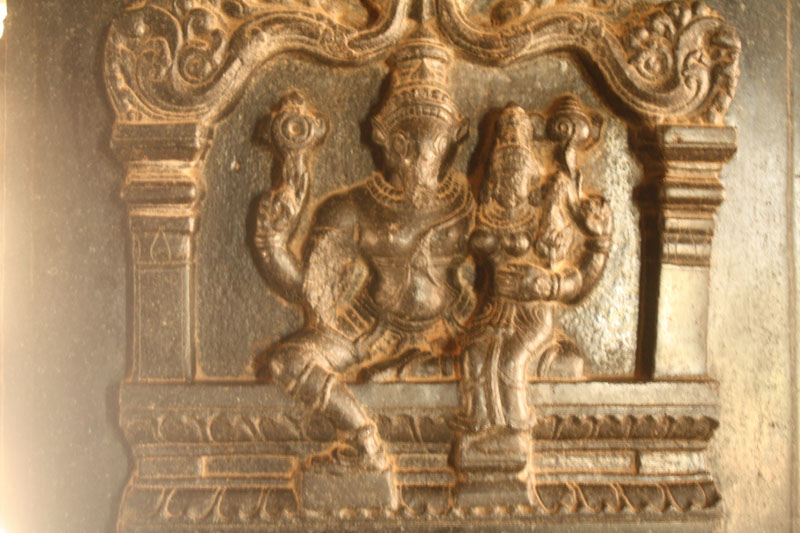 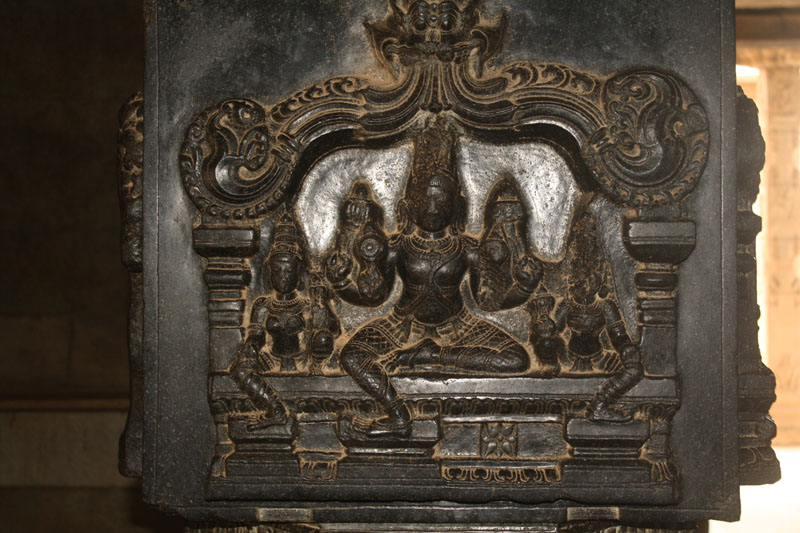 The inside of the Temple 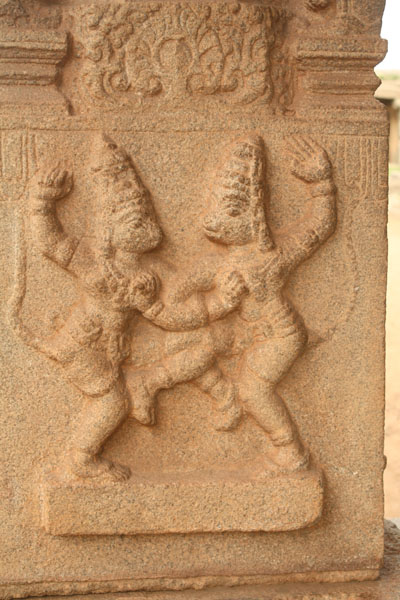 The famous depiction of the fight of Bali and Sugreev, the Monkey brothers from the Ramayana 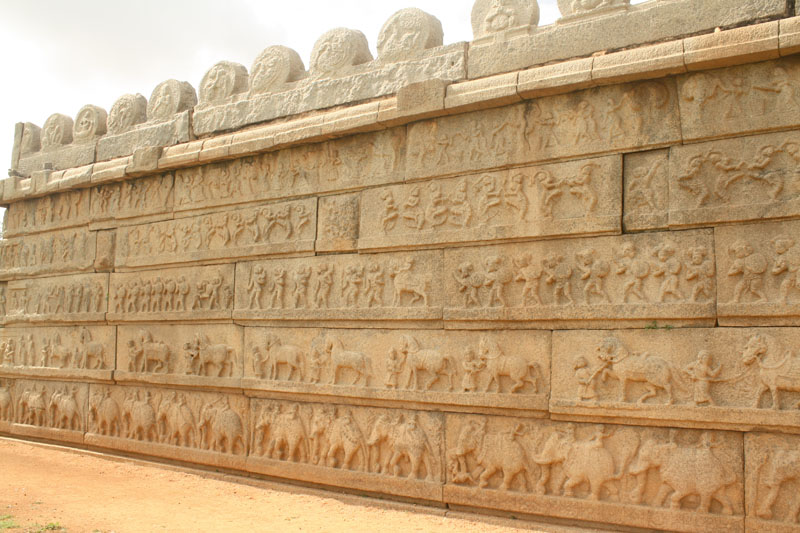 The walls of the Temple filled with scenes from Ramayana 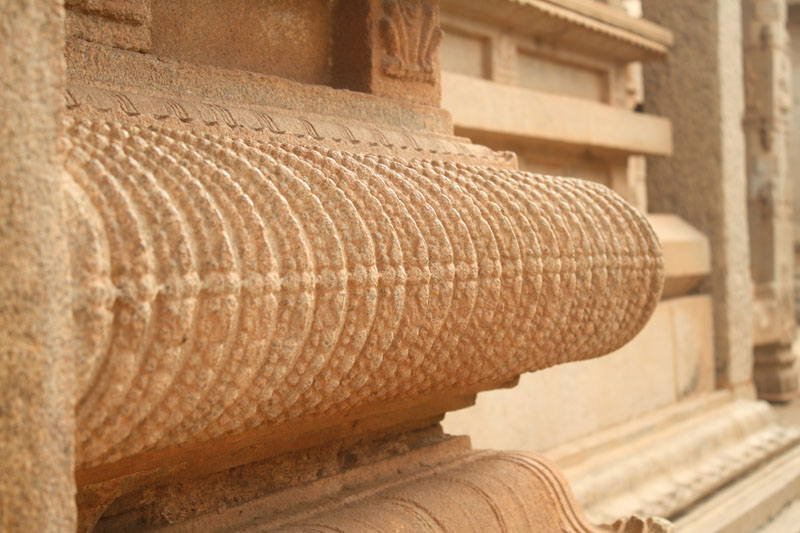 The Minute level of Carving can be seen here

The Sun was now straight over our heads and the climate was too humid. Shudi called out for a break and so after coming out of the temple we sat for few minutes under the canopy of a Banyan tree. A Icecream seller was nearby and those few minutes of our rest were spent on savoring the strawberry flavored ice candy.Quite refreshing .

We hopped to our next place called the Zenana enclosure which have a lovely Lotus Mahal inside. Archaeological Society of India charges Rs 25 as entry fee, to this protected place. The enclosure used to be the royal treasury house for the kings and the many watch towers along the high walls stands testimony. We came to know that this complex was once the highest security area during those time and its importance and safety was elaborate for it contained the Queen’s living quarters and the strongroom. 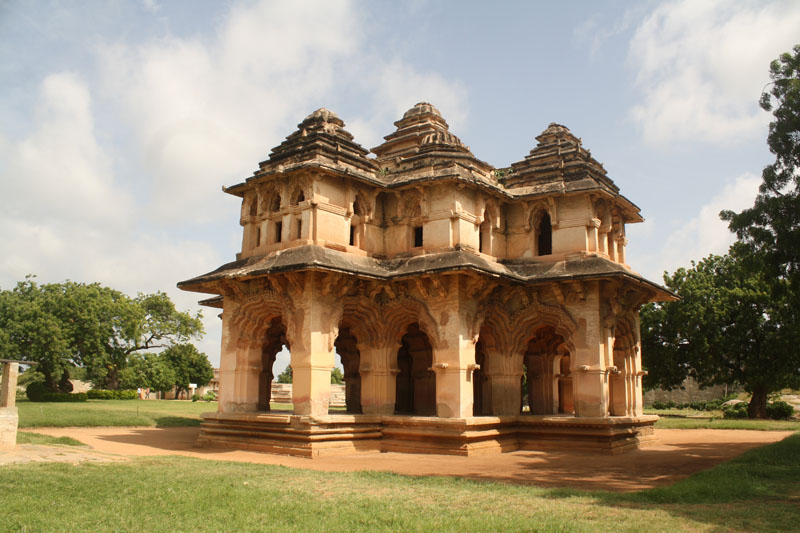 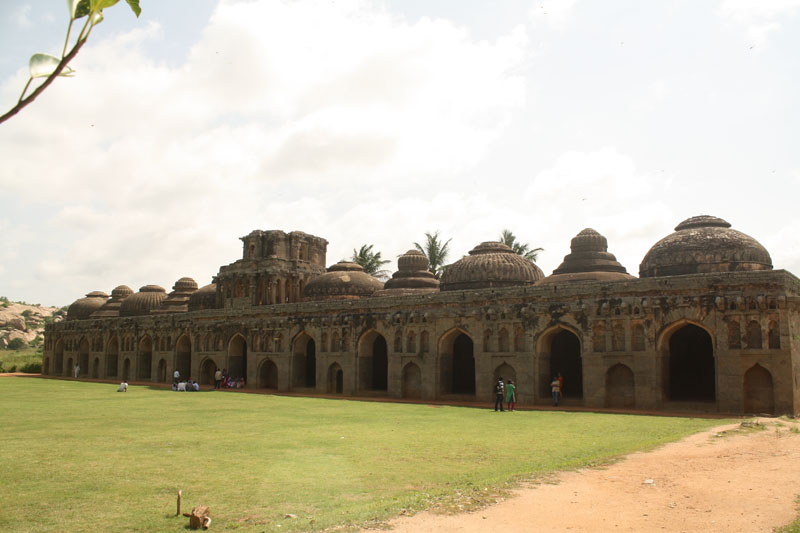 The enclosure also has elephant stable to its rear and a small museum to its right . 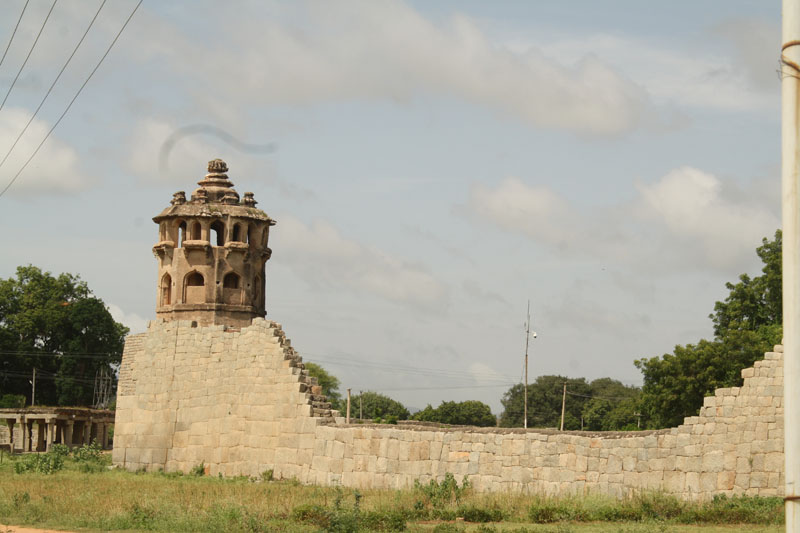 The complex was huge and to cover all of its area and its museum it took another 2 hours of our time. By the time we finished glancing on every corners and every nooks of the place to decided to have our Lunch. Since there were no restaurants nearby we had a mediocre lunch in the ASI’s canteen. 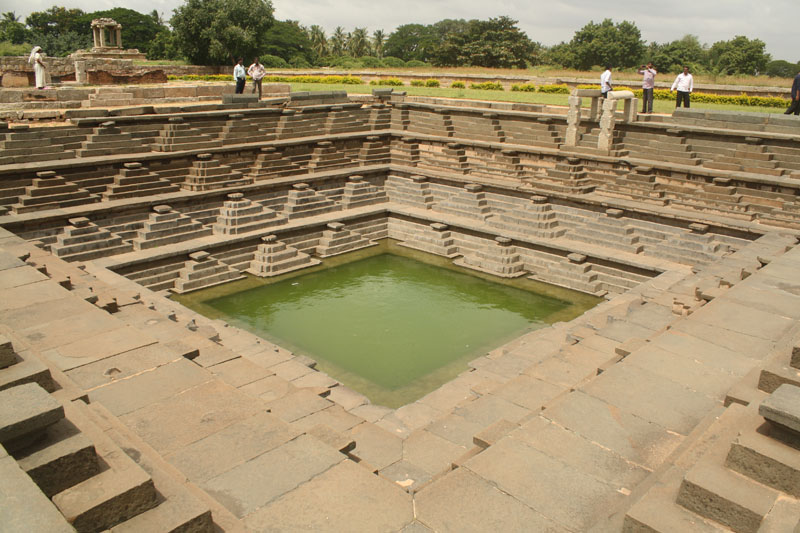 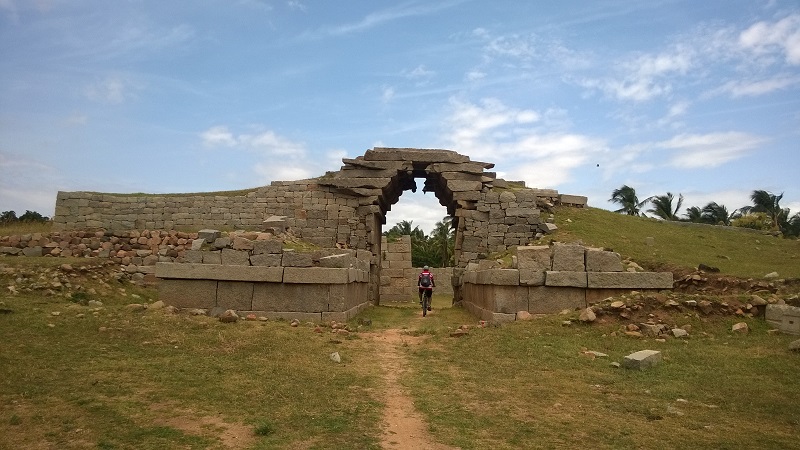 After finishing of our lunch we moving ahead to an another spot called Pushkarini ,Royal Enclosure and Bhima Gateway. Like our enthusiasm, the road ahead of us seemed unending with a promise for loads of adventures, waiting ahead. All the remaining places to visit were nearby but were spread across few kilometers to each other. Till the time it was dusk, we enjoyed rest of our remaining evening time, visiting these places with a happy face and pace.

How To Reach Hampi from Bangalore

By air Bangalore Int Airport is the nearest and 350kms .
By train one can reach Hampi by reaching Hosapete station and then taking a shuttle bus to reach Hampi .

Where to stay at Hampi

Reach Hampi and you will find many budget hotels/homestay . If high on budget and craves for a luxurious breakaway then there are many 3 and 5 star hotel available at Hosapete like the  Orchid group of hotels and The Hyatt palace to name a few .

Anytime of the year . But avoid the summers days (Apr-July) are harsh in those land and rainy season (Jul-Sep) makes roaming around a quite difficult task.