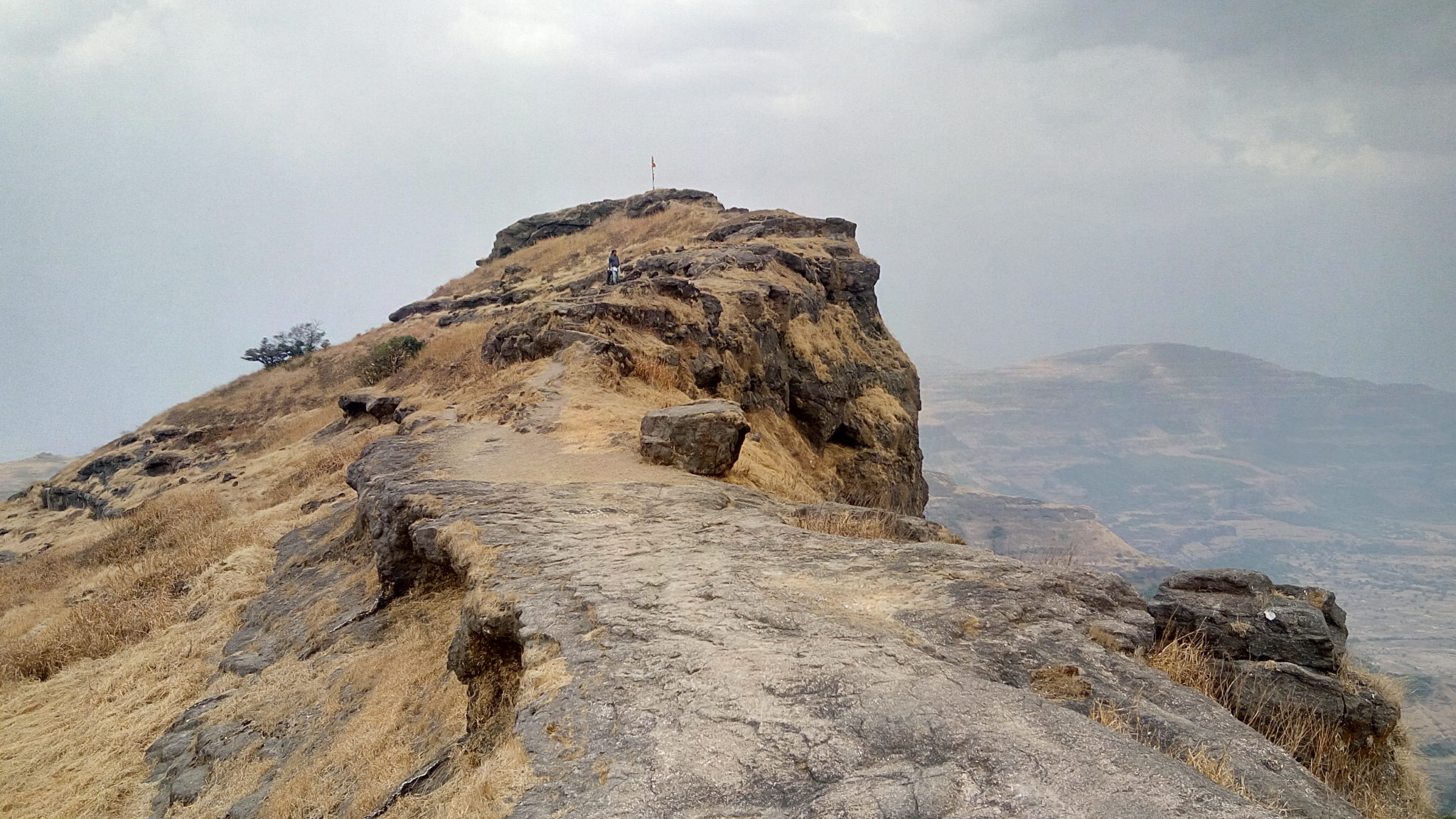 Sahyadri Ranges have always left an indelible mark in me, for it’s in here, I had my first trekking experience. Even after so many years and after trekking in so many adventurous trekking trails across India, I still remember one of my most memorable trek in the heart of Sahyadri Ranges, the trek to Harischandragad fort and the Konkankada. It feels like it was yesterday when I, along with my friends started from our respective places in the wee hours of night to reach the trek’s base camp. The josh and the enthusiasm was obviously very spontaneous. For me it was an experience of my lifetime. Trekking with some of my awesome friends and ah ! how can i forget, the inconceivable ,incomprehensible,spectacular and phenomenal view of the Konakankada that were beyond words to describe, were some among the many memorable time to treasure i had during this trek. So here is my trek report.. 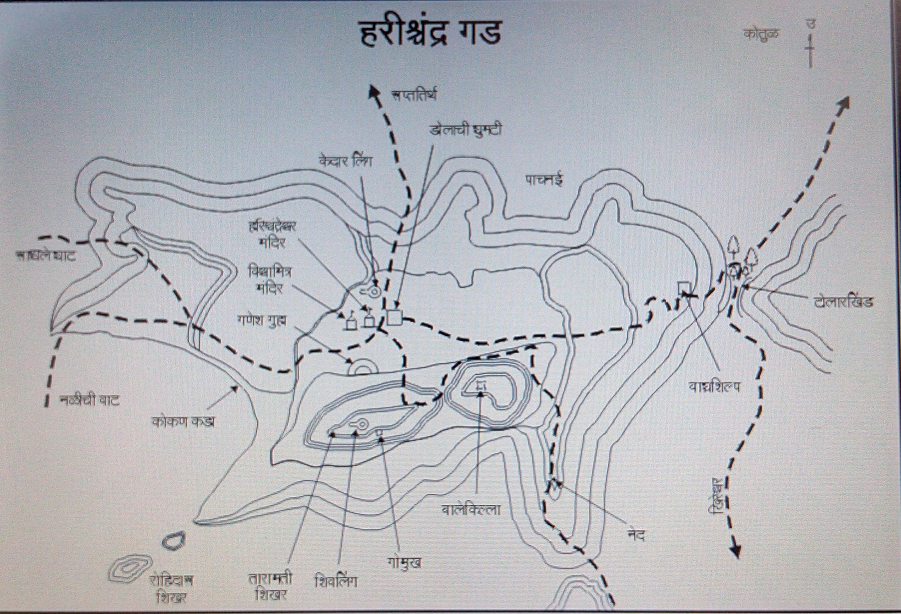 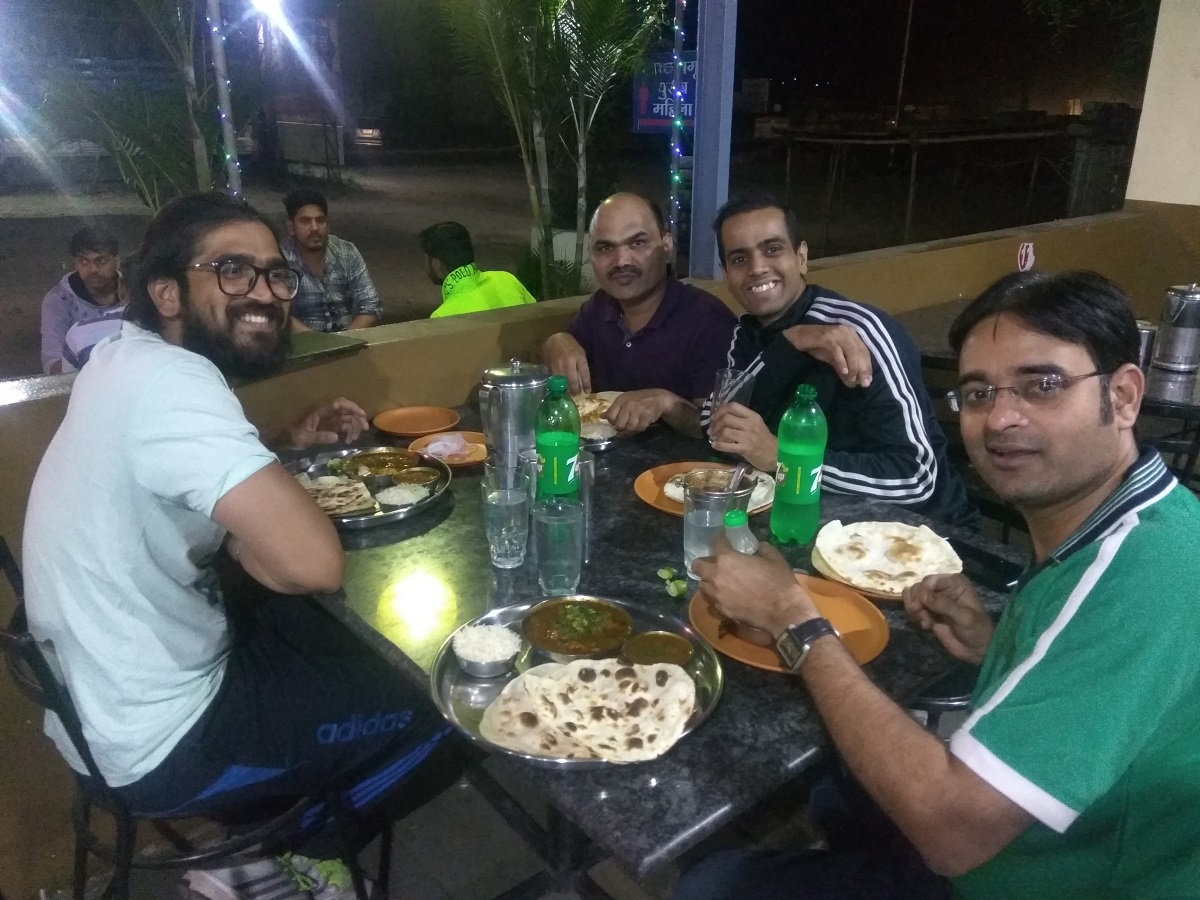 Dinner on way to the Harischandragad fort

So, we were 5 friends and as per our actual plan we were needed to cross Khubi Phata and then reach the base camp of Khireshwar Village before 2am, so as start early for the trek. The distance of Khireshwar Village, the base camp for the Harischandragad Fort trek was 195kms from Pune. And what happens in every plans we had a major delay en-route .Thanks to many breaks, missing a right turn road to Khireshwar village and then overshooting some 30kms ahead.

Anyways, after so much of delay we managed to reach the Khireshwar Village at around 5am. We found a sweet spot for our car to park safely. And only then we paced up on the untarred, narrow and graveled trails ahead. Tolar Khind was to be our first pit stop on way to Harischadragad fort.

Don’t know from where a pair of dogs appeared, who silently kept following us. Not sure, it was they who were escorting us or perhaps they kept trailing us for food. Whatsoever ever it may, we were now a 7 member strong team, with the two dogs leading the team.

The initial trekking trail was mostly flat with few steep patches, that made a killing into our trekking josh. Many time a thought ran into us “were we on right track”? But, along the path the stones having painted arrows marks to guide trekkers assured us that we are on right track.

Sun was about to rise from beyond the high mountains behind. The cold breeze and the awesome experience of early morning walk under the dense forest foliage on a forestry trail was quite a delightful experience for all of us. We made to Tolar Khind after around an hour or so of trekking. 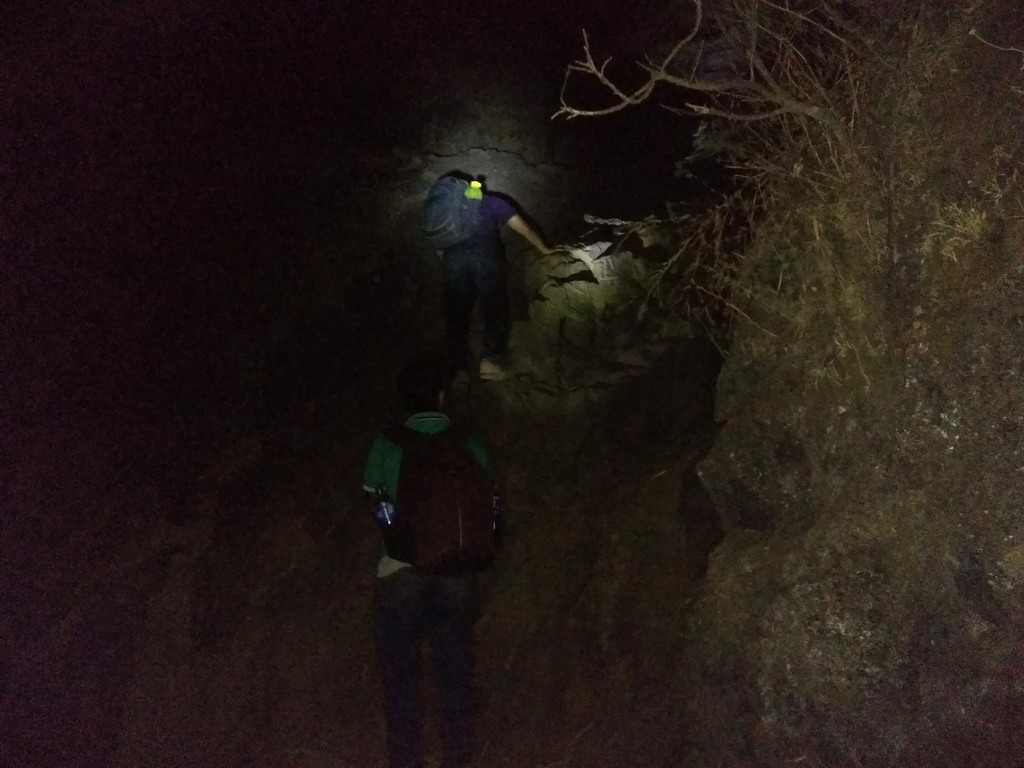 After the Tolar Khind it was getting tough and the exhaustion of not having a decent sleep the night before was a worry. We found some man made sheds and before continuing we unanimously decided to have a small power nap. We had a much need power nap with the dogs doubling as our silent guardians on this unknown land. 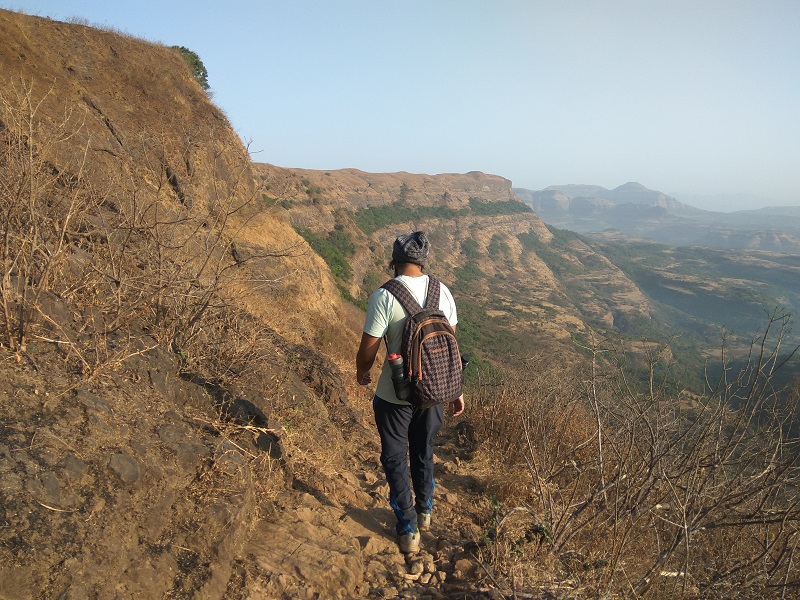 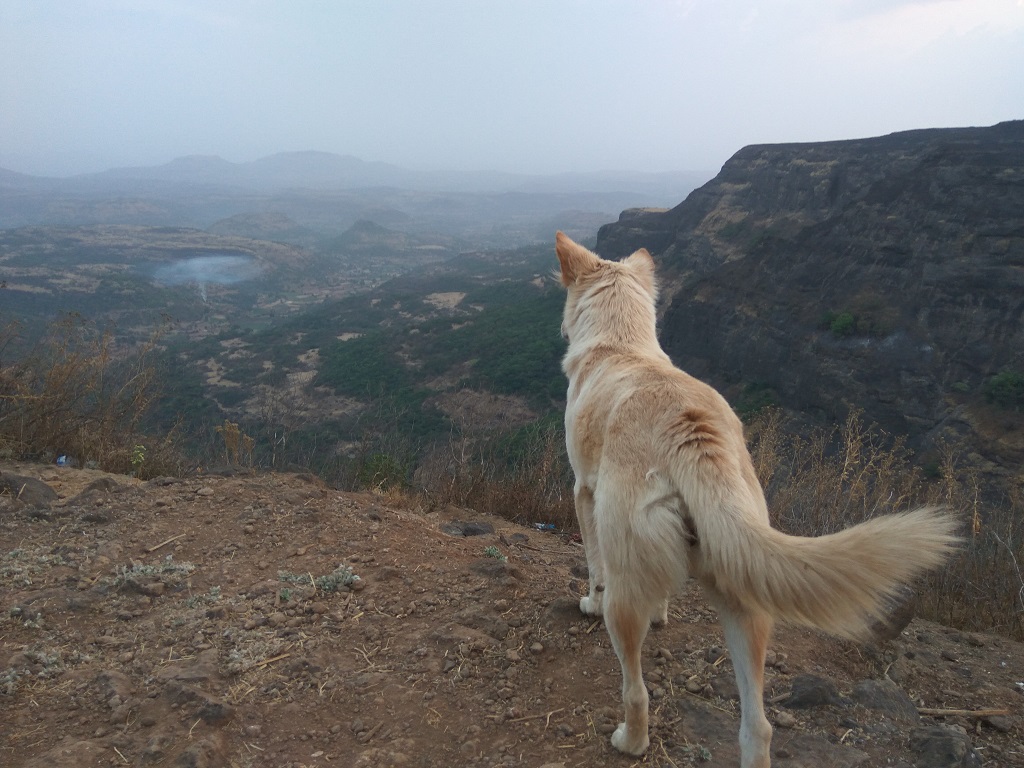 We must have slept some 30-40 minutes. And when we woke up, we all could feel a very refreshing lease of energy. After having our packed breakfast and with full of vigor and energy we resumed our trek. 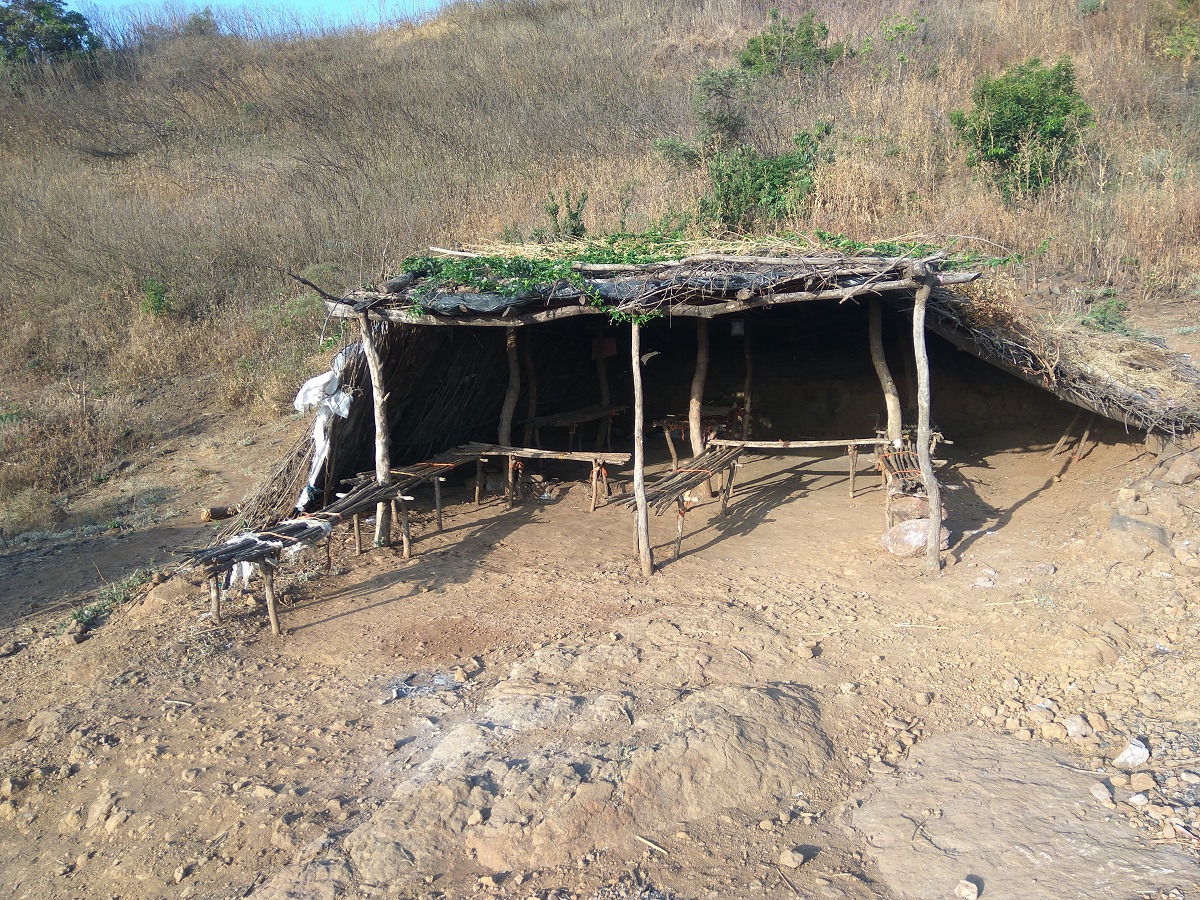 The hut, under which we took some rest before resuming our trek. 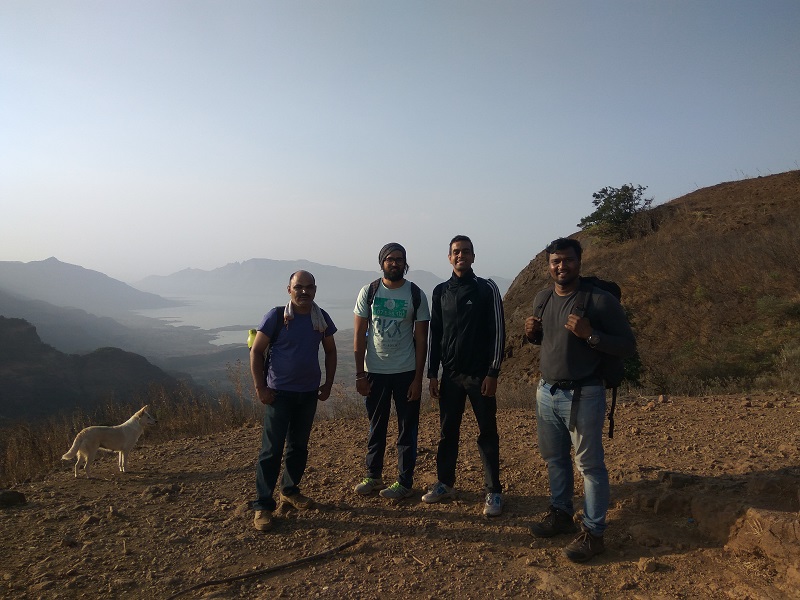 The rest of the trek went uneventful. It was just a piece of walk on the flat land , with some rocky difficult patches to circumvent. The trek difficulty through that patch was quite moderate. It would have been quite exhausting walking through, but thanks to the partial cloudy  sky, it didn’t got too sunny. We were constantly hydrating. We covered the rest of the distance and could now  see the harishchandragad temple top from a distance. But it was still very far away. 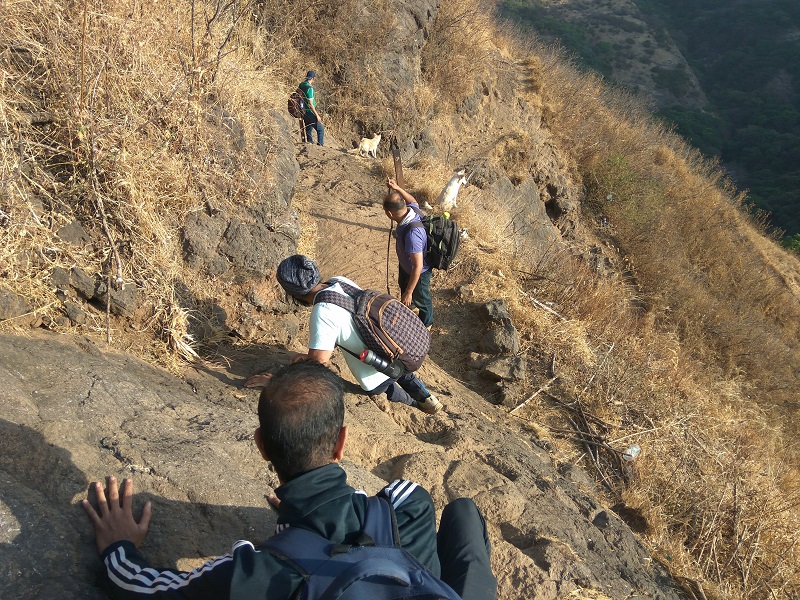 A short video of the trail

It was around the time of lunch hungry, low on water, dead tired and exhausted, we reached the temple premises of Harishchandreshwar temple. We took refuge nearby in one of the thatched sheds run by a humbly old couple. Since drums were beating inside our void stomach, we ordered some lunch food comprising of rice and lentils. We came to know of the real meaning of a the phrase -The taste of food exponentially increases when some is too hungry. It was much needed.

After our lunch and a small break we started exploring the nearby place. The fort around had structures and few caves which seemed quite ancient. Someone there said that few carvings and paintings remnants of Microlithic man have been discovered here and this place’s reference has been found in various Puranas like Matsyapurana, Agnipurana and Skandapurana. Further the original fort is said to have been built during the rule of Kalachuri dynasty, dating back to the 6th century AD. 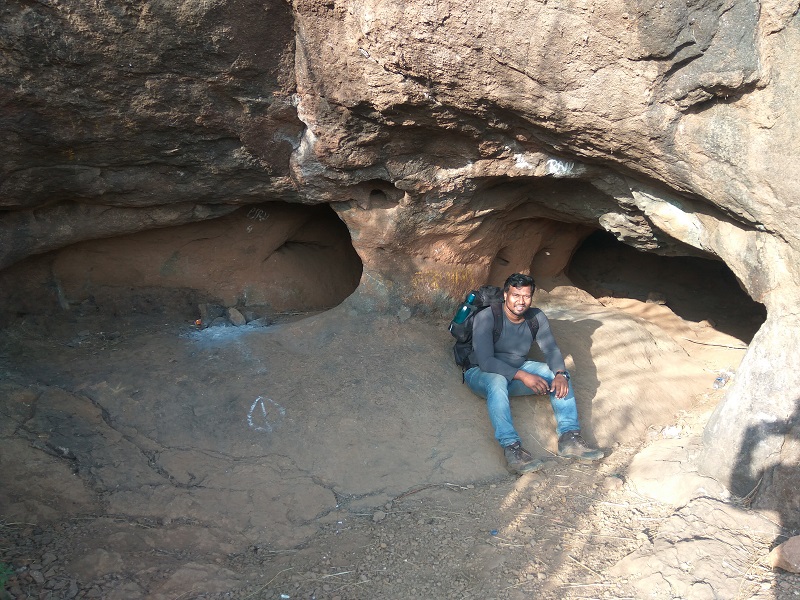 The carvings on the temples of Nageshwar (in Khireshwar village), in the Harishchandreshwar temple and in the cave of Kedareshwar indicates some phase of the ancient periods. But to our ignorant eyes we could not judge any difference from a piece of rock.

Anyways we then went up ahead and explored the caves nearby to the temple. One of the cave there has a huge monolithic idol of Lord Ganesha. And then to its south is a well-built lake called “Saptatirtha Pushkarni”.

Ganesha statue in one of the cave 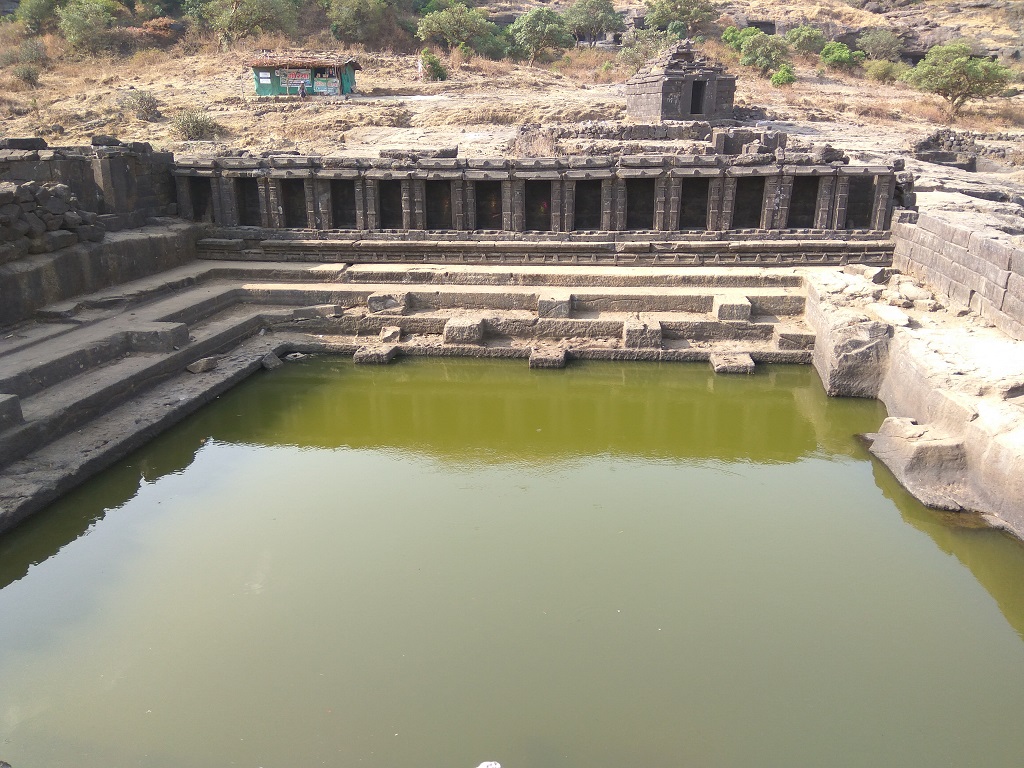 Further down the main temple we got to see the Kedareshwar Cave. The main attraction in here is the huge Shiva Linga. With a height of 5 feets from the base and completely submerged in waist-deep icy cold water it was quite mesmerizing sight. 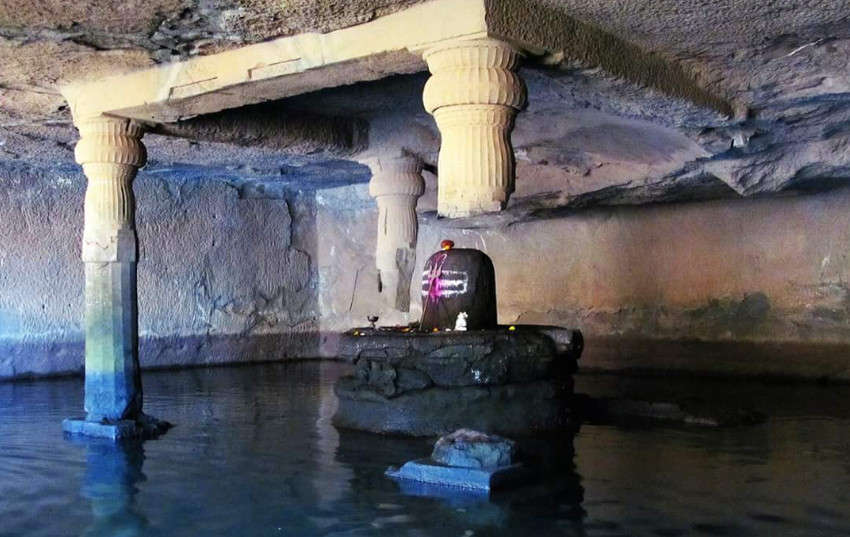 We then moved towards the main attraction of our trek i.e the temple of the Harischandreshwar. The temple is a marvelous example of the fine art of carving sculptures out of stones that prevailed in times of ancient India. At a height of 16 m from its base, the top of the temple seems to vaguely resemble the architectural style of Indian temples that are typically found mainly in the north Indian part Subcontinent. One can see few ancient water tanks and water cisterns that is said to provide portable drinking water, even during the driest of the summers. 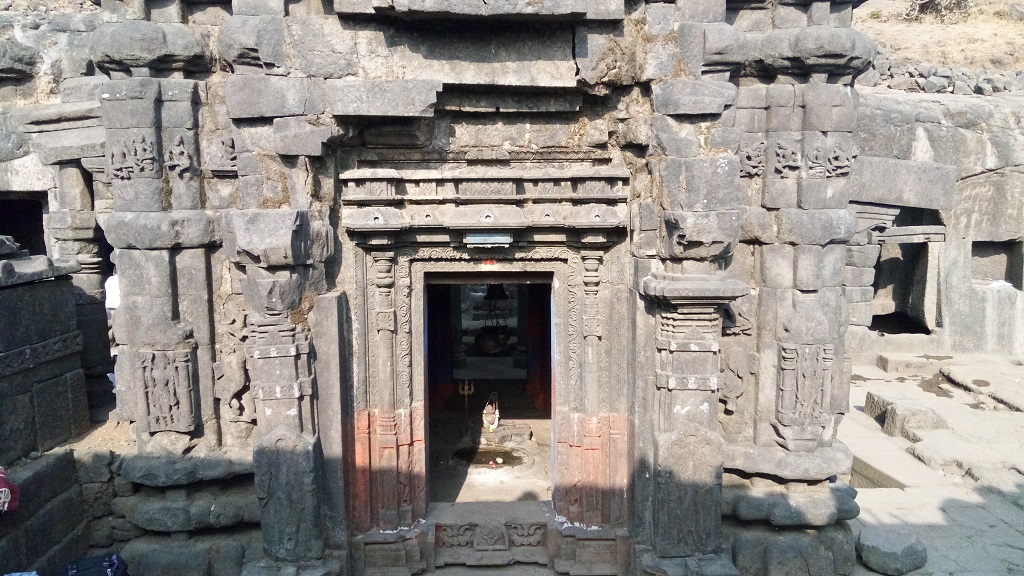 Our next target was to reach Konkankada. We took the path from the Taramati peak,which is the second highest after the Kalsubai peak of Sahayadri hill ranges. It was quite humid there and the path was little tricky to traverse. A huge Maratha flag atop a long iron rod was the only man made thing we found on the Taramati peak. On the background as far as we can see, were the huge and thick forest land. 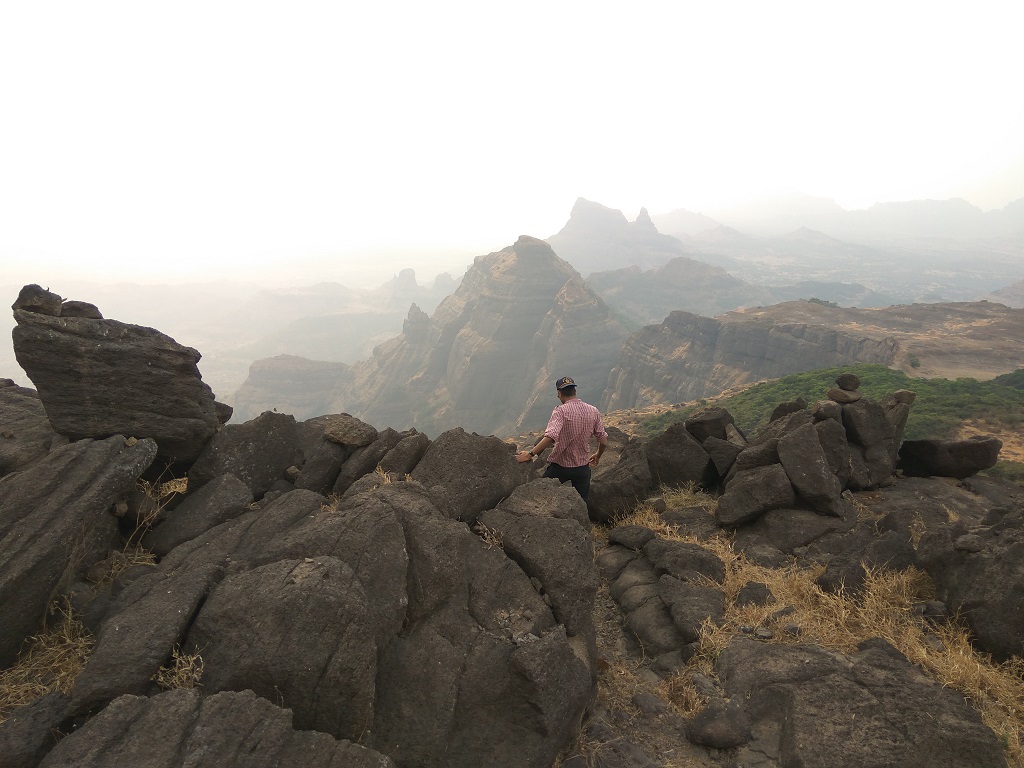 It was from there the path became dangerous, where in some places the trail seemed to have vanished in the thin air. And in some , we had to get down to lower reaches stepping down a precariously old rusted and dangerous iron ladder. 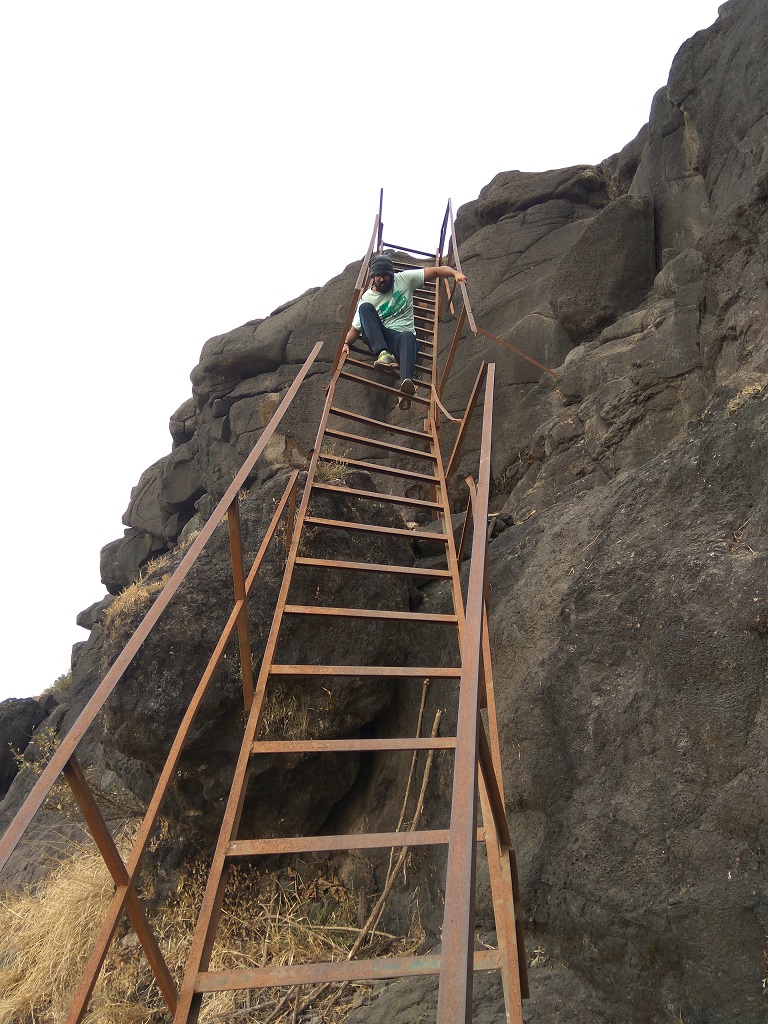 The iron ladder in one on way down from Taramati peak. Note the level of risk. 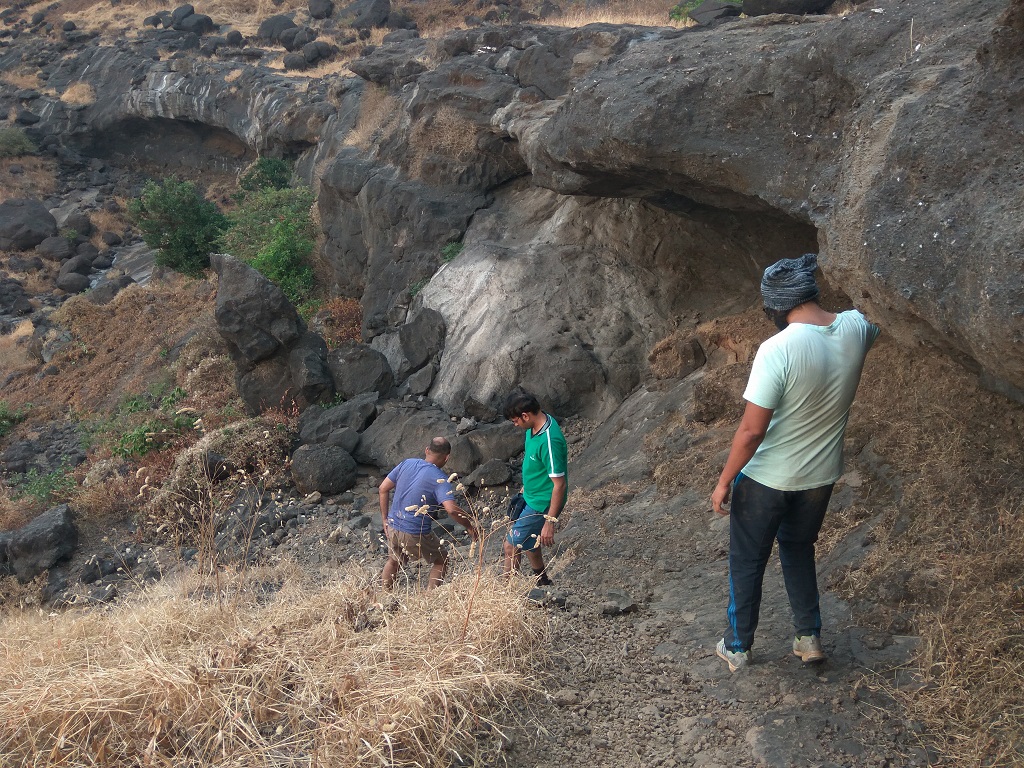 Now we have crossed and have left behind the most dangerous path. And we were nearing our final stop, which is also our trek’s high point i.e Konkankada. 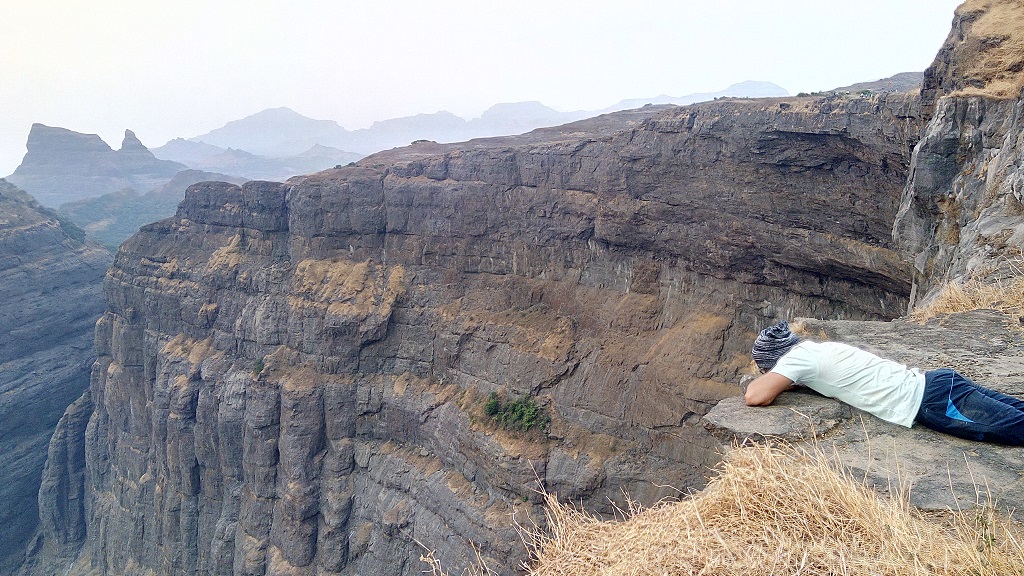 Konkakada is a vertical cliff whose over-hanging shape seems to have protruded like a hood of a cobra. This natural architecture provides a great view.the experience of the chilling weather and cool breeze in the night while camping. We spent our remaining time ideally sitting there and aimlessly looking towards the vast emptiness of the magnificent Konkankada cliff. The windyness with a thin air of coldness felt good under the reddish orange coloured evening sky. 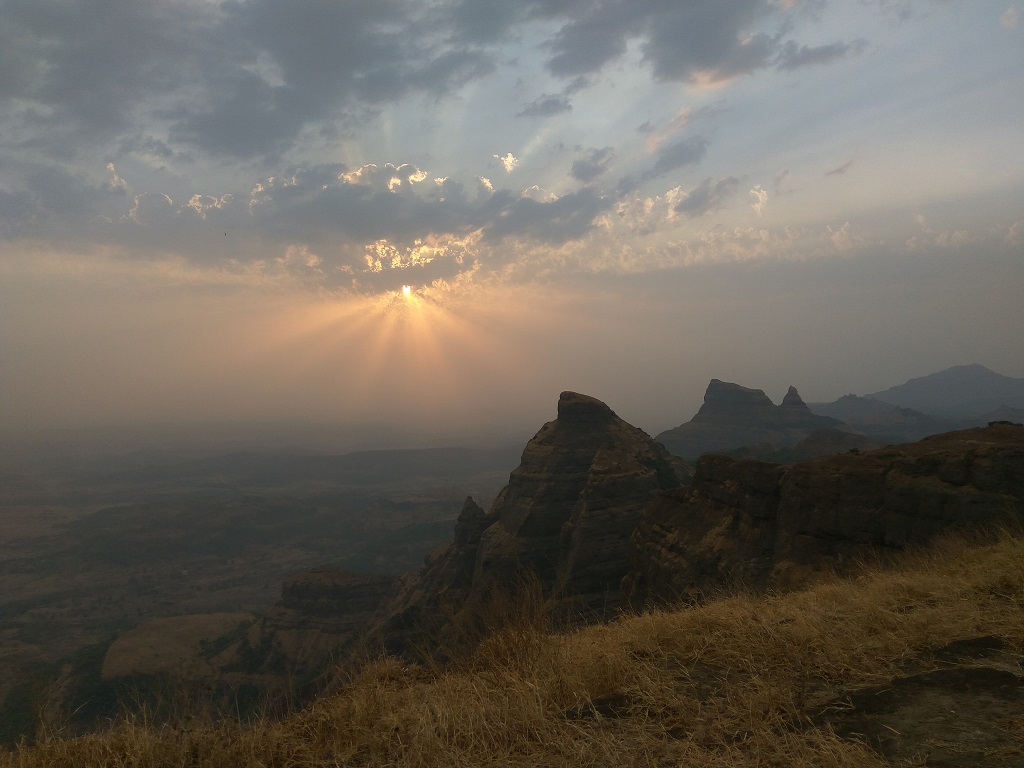 We must have spent more than an hour exploring the place around the Konkankada. It got dark when we left Konkankada and reached our shed house near the Harishchandragad temple. Rest of the night just went by gossiping around a bon-fire that we lit. 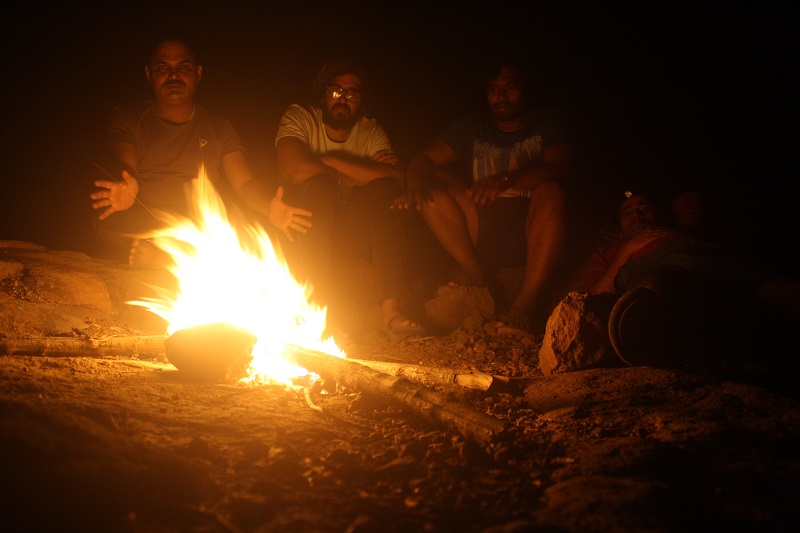 It was an superb experience and I will definitely do this amazing trek again some day.