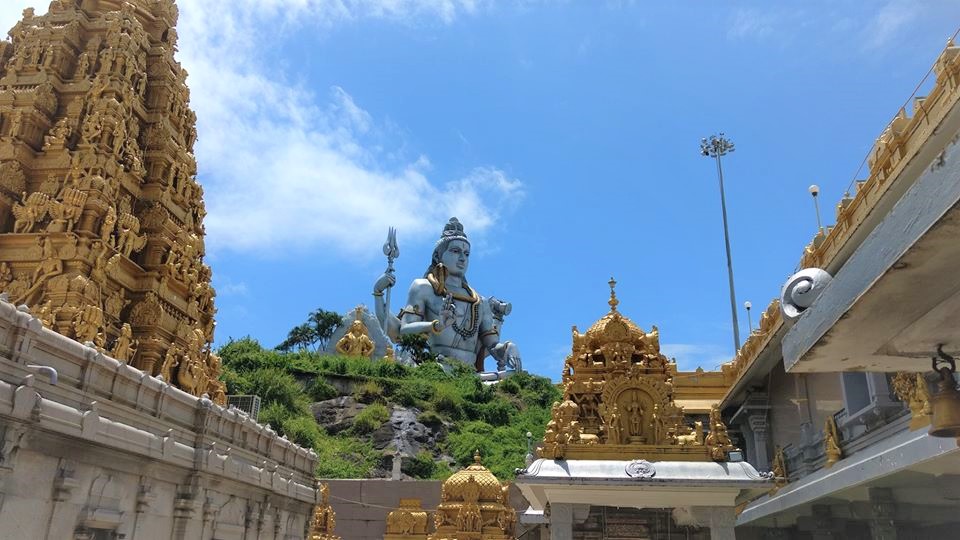 The spiritual town of Murudeshwar lies on the sea-front of the western part of Karnataka. It is at a distance of 160 Kms from the Mangalore city and being a sea shore town it attracts millions of pilgrims and holiday-makers alike to this place.

The major attraction of Murudeshwar town is the Murudeshwara temple and the massive 123 fts high statue which is said to be the world’s second-tallest Shiva statue. This massive 123 fts high statue of Lord Shiva on the Kanduka Hill is surrounded by water on all three sides and is designed in such way that it gets the Sun’s light directly falling on it which appears sparkling in the early morning sky. 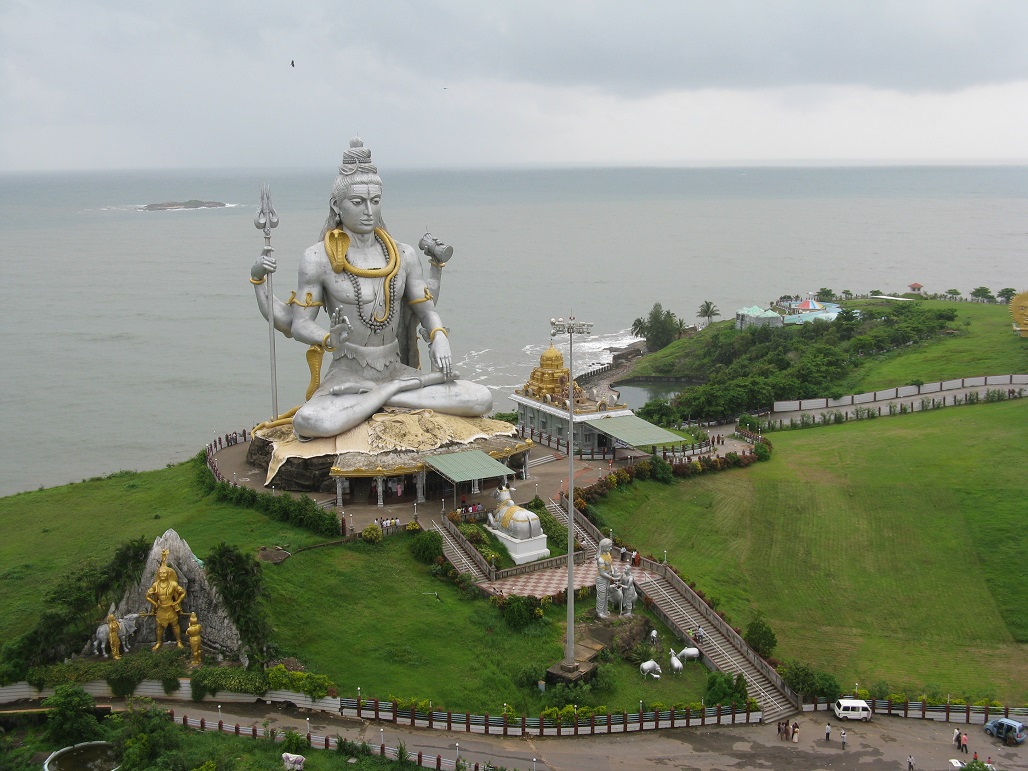 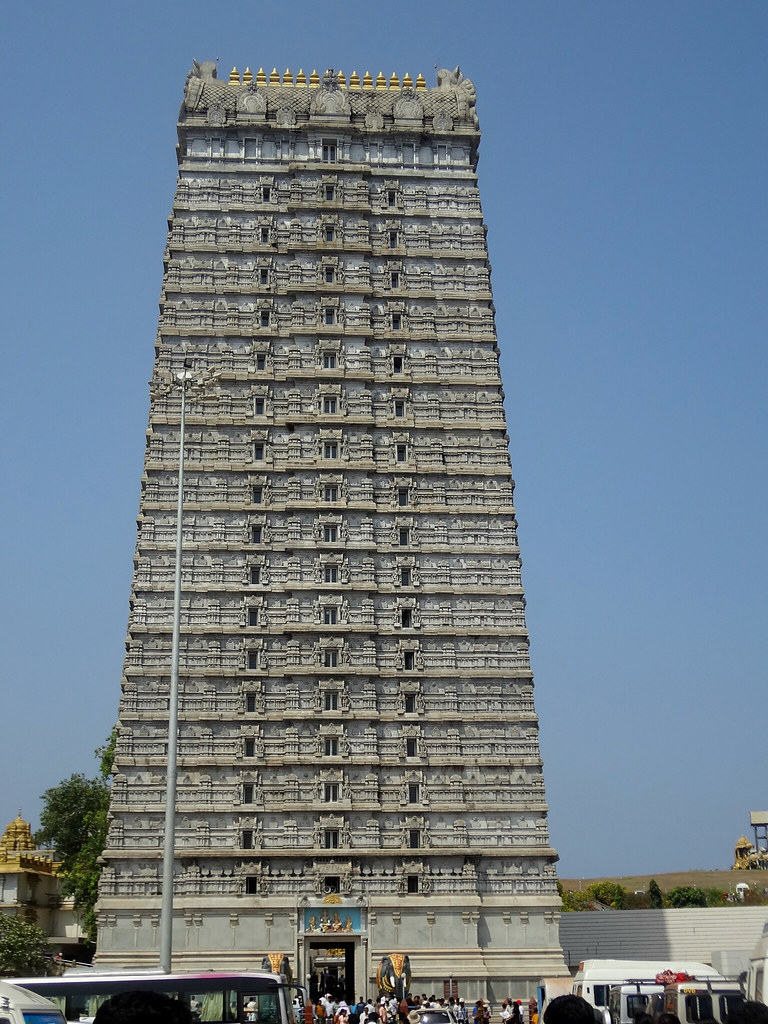 Another attraction of Murudeshwar Temple is the temple’s raja gopura or entrance. Two life-size elephants made up of concrete, stands guard at the steps that leads to the entrance of the Raja Gopura. It is a 20 storied high structure which is installed with a lift that takes its visitors to the top of the gopura where viewers get to see a breath-taking view of the 123-feet  Lord Shiva’s idol.

Within the temple premises there are many depictions showcasing many major events from th eEpics of Ramayana and Mahabharata. One of that is the depiction of Ravana, who is  giving the Atma Linga to Lord Ganesha. 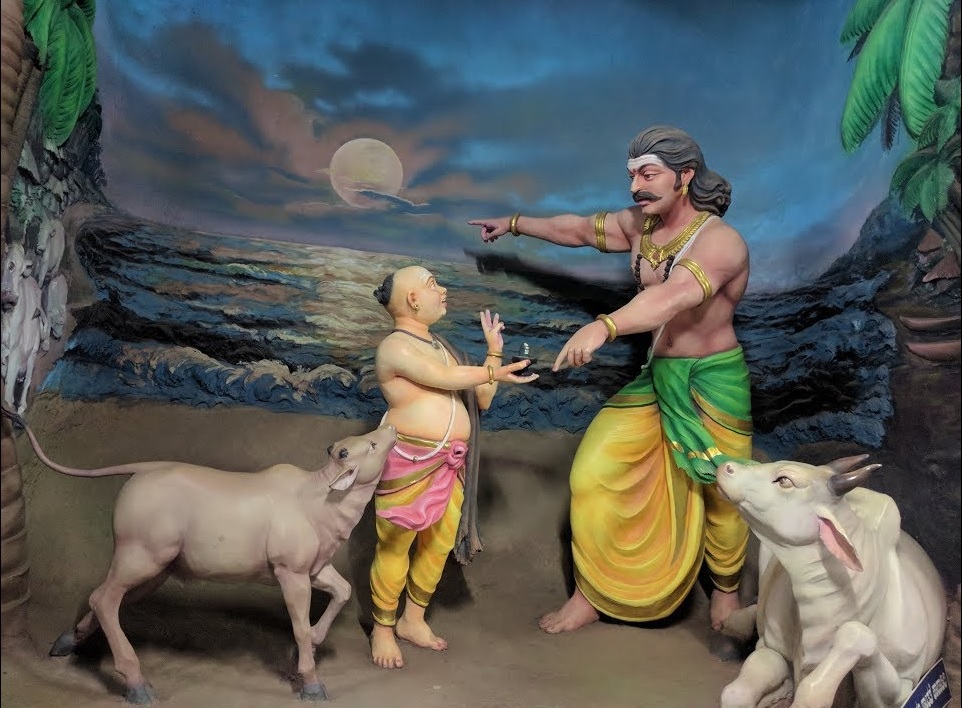 The entire structure is completely built in the year of 1999, by R.N Shetty, a philanthropist and businessman. Except the principle sanctum, which still holds the same old flavour, the whole temple has been transformed in the contemporary style.

The temple opens at 6am and closes at 8:30pm .The only time it closes are between 1pm and 3pm.

By Rail : Murudeshwar has it’s own railway station and many major many trains halts at this station.

Trains details Between Mumbai and Murudeshwar

By Air : The nearest airport to reach Murudeshwar is at Mangalore. Daily Non- Stop flights operate between major cities i.e Mumbai / Bangalore and the Mangalore city. The flight time is only 1 hrs 50 mins.

Where to Stay in Murudeshwar

Murudeshwar has lots of staying good options to suit every type of budget or luxury travelers needs, right from simple dormitories to lodges to luxury hotels. RNS Golf Resorts, Royal Oak Resorts in Bhatkal should be your best accommodation options.

The months of October till May are the best time to visit Murudeshwar. Also during the holi MahaShivaratri, an important Hindu festival here and it is here celebrated with great enthusiasm.

A video on the Murudeshwar Temple and Jog Falls