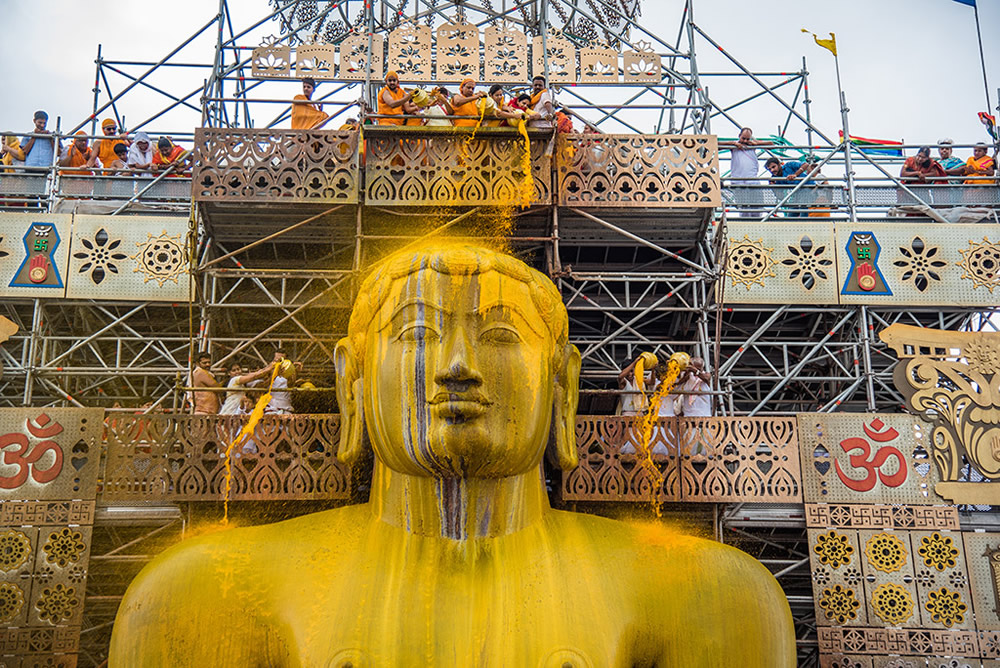 Gomteshwar at Shravanabelagole town is about 170 kms from state capital Bengaluru. The monolithic statue of Bahubali (popularly known as Gomateshwara) is one of the most sacred place and a pilgrimage site for the Jain community who believes that Lord Bahubali is endowed with great qualities which inspires renunciation and enlightenment that are the cornerstone for attaining salvation. 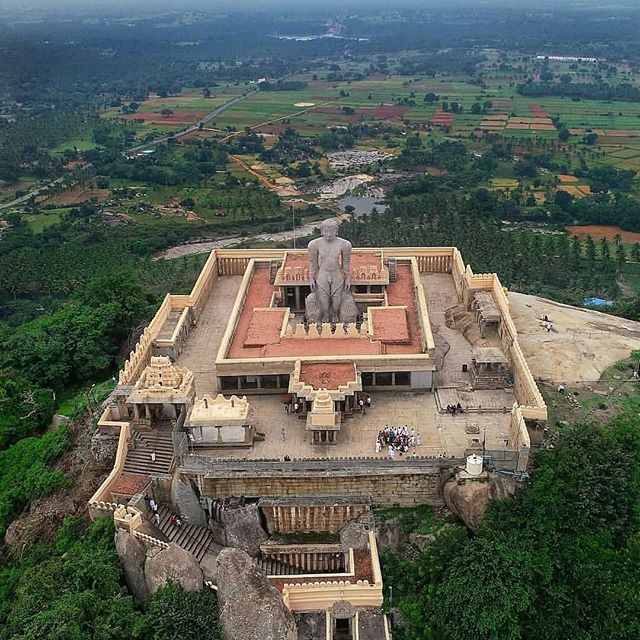 The statue of Lord Bahubali was commissioned in the year of 981 AD, by a Ganga dynasty minister and commander named Chavundaraya . Carved out of a single block of granite, atop Vidhyagiri hill, it stands tall at 58 fts (17 m) thus making it the largest free-standing statues in the world. The Gomateshwara statue is in the posture of Kayotsarga as Digambar (nude) form of Bahubali and stands on an open lotus that portrays its completeness. On either side of it stands two chauri bearers while the anthill in the background signifies the never ending self-punishment of Bahubali.  Engraved in this anthill is a snake and a creeper which wraps around the hands and legs of the statue. 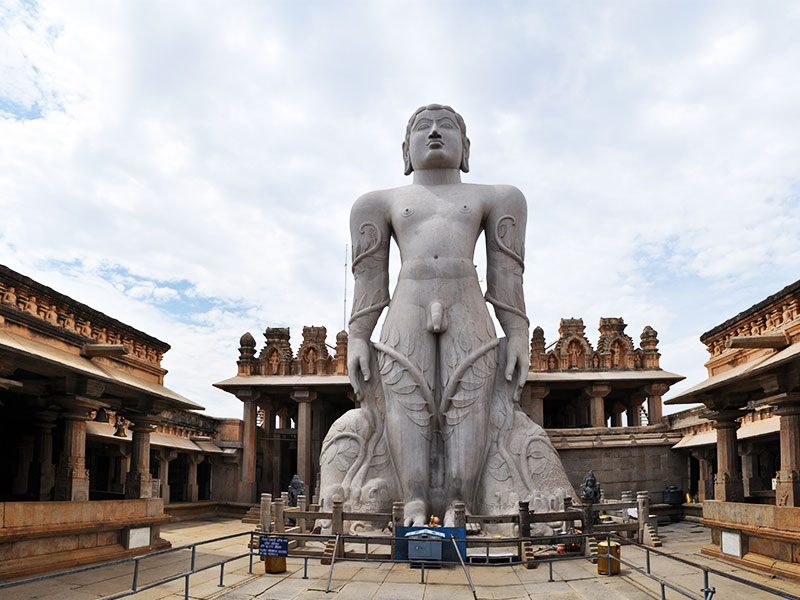 Besides the statue of Lord Bahubali, the Vidhyagiri hill also houses a Jain shrine and temples namely the Odegal Basadi, Siddhara Basadi, Chennana Basadi, Akhanda Bagilu and so on. The surrounding area of Vidhyagiri Hill is called Suttalaya which is believed to have been continuously built/improved during the reign of various later rulers-  Hoysala kings, Mysore Wodeyars and others, who ruled the land. 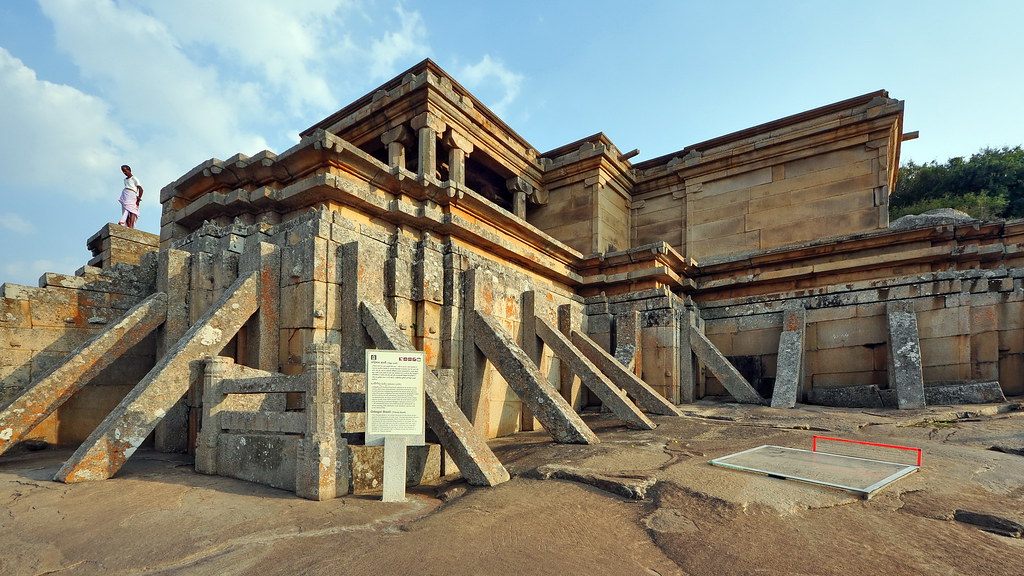 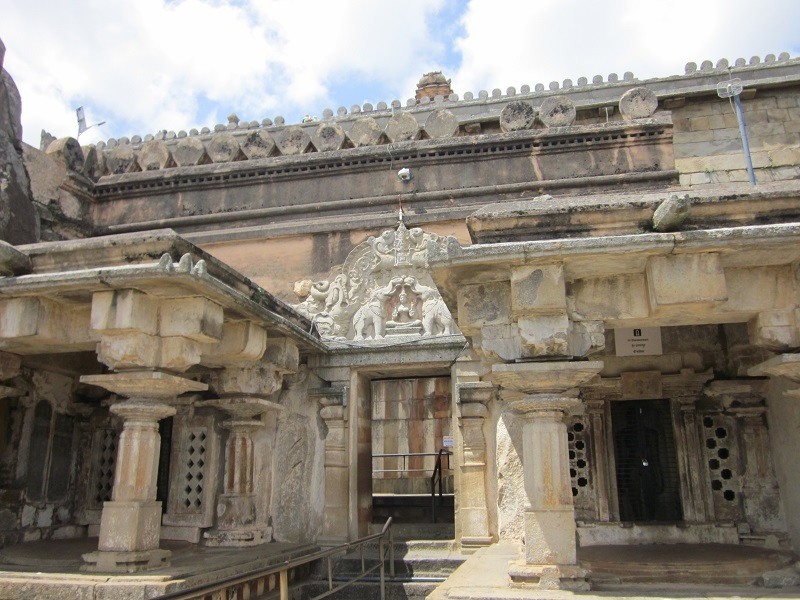 At an interval of every 12 years, a huge festival called Mahamastakabishekam is organised where millions of people comes to celebrate by dowsing the statue of Lord Bahubali with Purified water, milk and sandalwood paste. This event begins by thousands of devotees carrying specially prepared 1,008 vessels. The statue is then bathed and anointed with libations such as milk, sugarcane juice, saffron paste, ashta gandha paste, herbal liquid and saffron flowers. This Mahamastakabishekam festival continues for weeks. 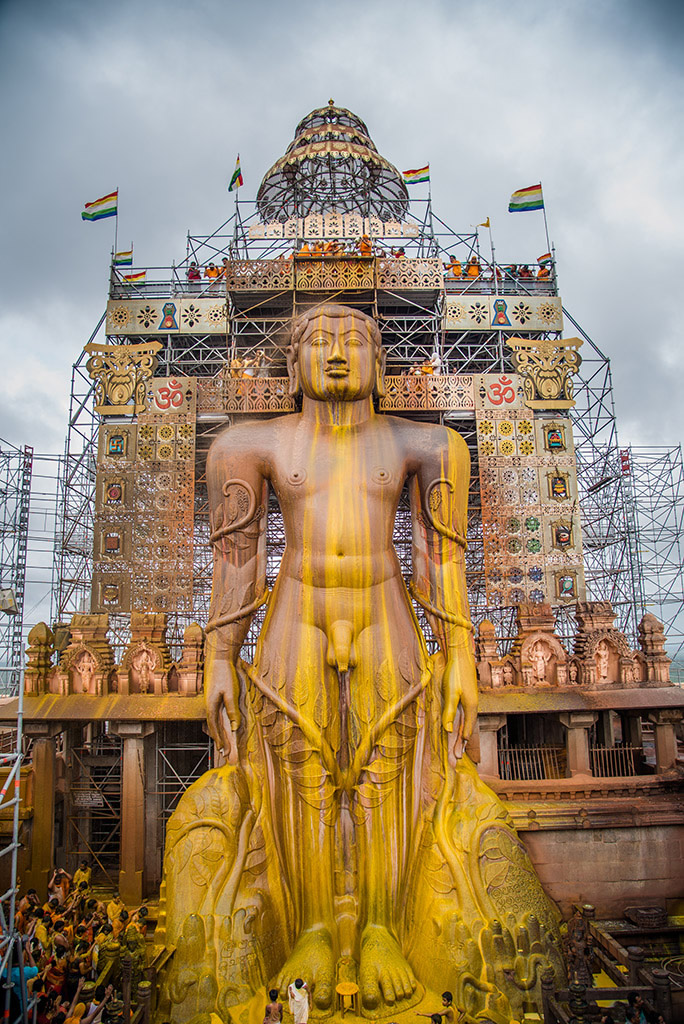 How to Reach Shravanabelagola

By Bus : Shravanabelagola is well connected by Bus network from the all major bus terminal in Karnataka. From Bangalore one can catch a KSRTC bus from the Majestic Bus Stand, Platform No 1. It takes 40 minutes to reach Channarayapatna bus stop. And then changing bus at Channarayapatna catch another direct bus, which takes another 30 minutes ride through beautiful, rural landscape to reach Shravanabelagola.

By Train : Hirisave railways station is the nearest station which is around 20 Kms from Shravanabelagola. There is a daily direct intercity trains available from Yaswantpur Railway Jn that takes 90 mins to reach Hirisave station .

By Airways : Nearest Airport is the Bangalore International Airport which is at a distance of 210 Kms from Shravanabelagola.

The best season to visit Shravanabelagola are the months of October to March. The regions get heavy rainfall during the monsoon season of  May till August.

Where to Stay at Shravanabelagola

There are many hotels and lodges facilities available in Shravanabelagola. You book online or can directly walk in to any hotel you desire to get an accommodation . Shravanabelagola gets really crowded with devotees during the Mahamastakabishekam festival and during the weekends . So while visiting during those days you will need to confirm your hotel booking preferably before reaching there. For reference you can check the options of accommodation available at Shravanabelagola  in the Karnataka tourism official site by clicking here.

Best Restaurant to eat when at Shravanabelagola

Fooding options are limited and is pure Vegan Jain food. You can try out the popular Suranga Jain Bhojanalya or the Vishnu Regency restaurant. Here you will find a great variety of Jain vegeterian food. The ingredients, flavors and the tastes of its cuisines are distinctive and versatile. Some of the typical dishes that includes in their menu are Bisi bele bath, piping hot rava idlis, dosas, sheera,Jolada rotti, Chapati, Ragi rotti, Akki rotti, Saaru, Huli, Vangi Bath, Khara Bath, Kesari Bath, Davanagere Benne Dosa, Ragi mudde, and Uppittu.