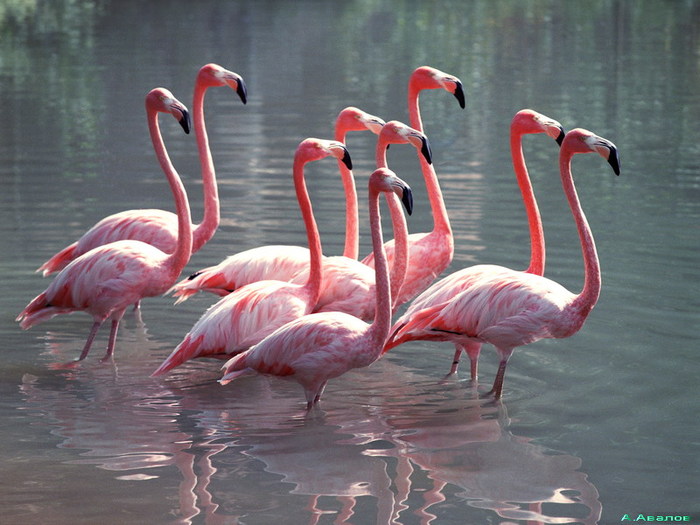 Gujarat, India’s westernmost state, is among the most vibrant state of India .Having varied terrain ,climate and numerous sacred sites ,it is said to be a Pandora box of surprises for tourists from around the world. Following is my list of 11 best places to visit in Gujarat :-

1) DHORDO- RANN OF KUTCH UTSAV – The ‘Rann of Kutch’ is a vast area of salt marsh lands .It remains seasonally marshy round the year that dries up only during the onset of monsoon ,thus turning the whole vista for miles into a dreamy ,snowy white flat lands .Each year ,during the months of  December till February ,Dhordo plays hosts to,one of its kind grand annual event of Rann of Kutch Utsav .This months long festival organised by Gujarat Tourism board showcases the rich cultural and tradition of the people of Kutch region. The distinctive folk dance of Saurastra region ,some of the soul touching music of Kutch and superb foods amid the vast desert expense are some of the many prime attraction of this festival. To be the part of this festival one has to first reach the city of Bhuj . 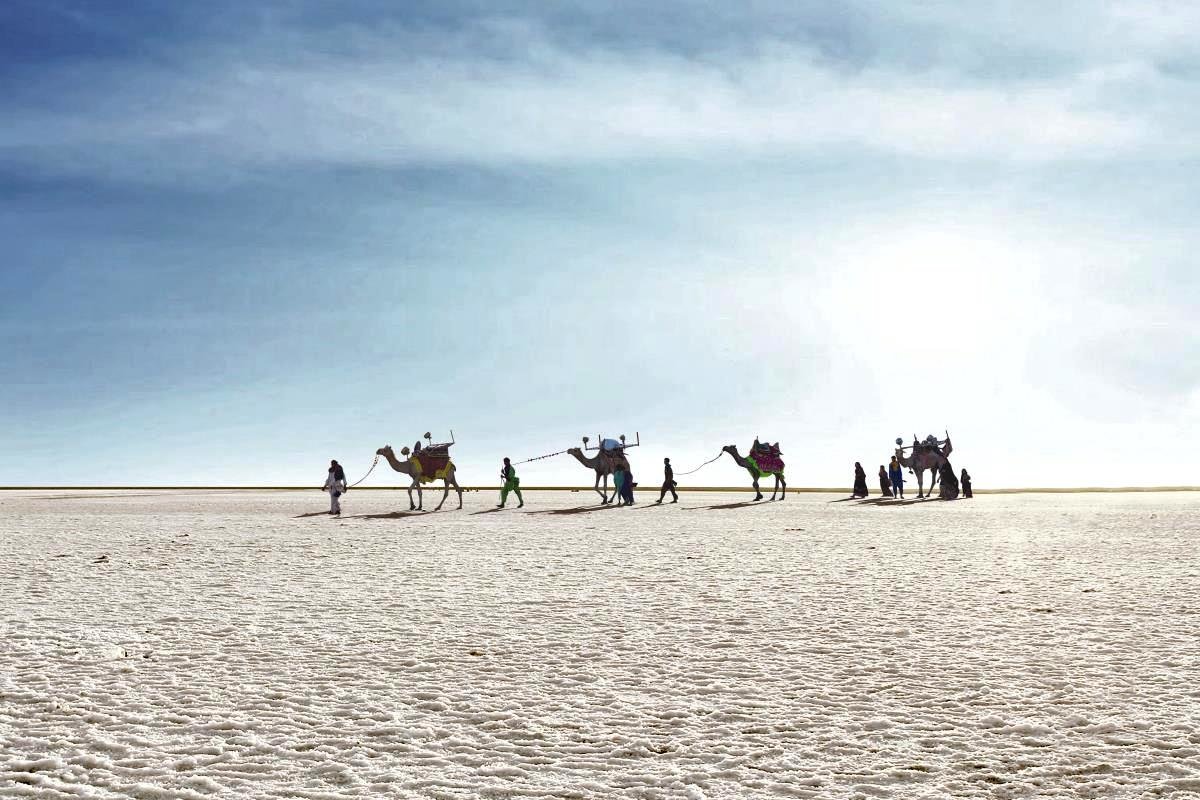 Read My blog on the Rann of Kutch Utsav here.

How to Reach Dhordo from Bhuj

2) KUTCH DESERT WILDLIFE SANCTUARY – It is one of the largest seasonal saline wetlands and also the largest sanctuary encompassing a true saline desert in the Great Rann of Kutch region .Bordering the Wild Ass Sanctuary and Pakistan on the north-western side it serves as the natural habitat to rare wild animals like hyenas, sambhar, jackals, chinkara, wild boar, nilgai, Indian hare, and pale hedgehog .It is a well known among bird enthusiastic, as it is the biggest nesting ground of magnificent Greater Flamingo bird in the country .

Its a place near to the Dhordo and one can plan a day trip to the sanctuary while on a week long stay at the Rann of Kutch Utsav .The distance is hardly

3) AAINA MAHAL,BHUJ- Lying just 56km from the city of Bhuj and otherwise known as ‘Hall of Mirrors’ is a magnificent 18th century palace . This bygone era palace now houses a handicraft museum containing intrinsically carved ivory doors ,Victorian era fountains and great architecture which awes its visitors .The imposing architecture, collections and its rich history ,find it’s worth paying an extra few rupees for the use of your camera.It needs 30-45 minutes to walk through.The timings to visit the Palace are from 9am – 11am & 3pm – 5pm. 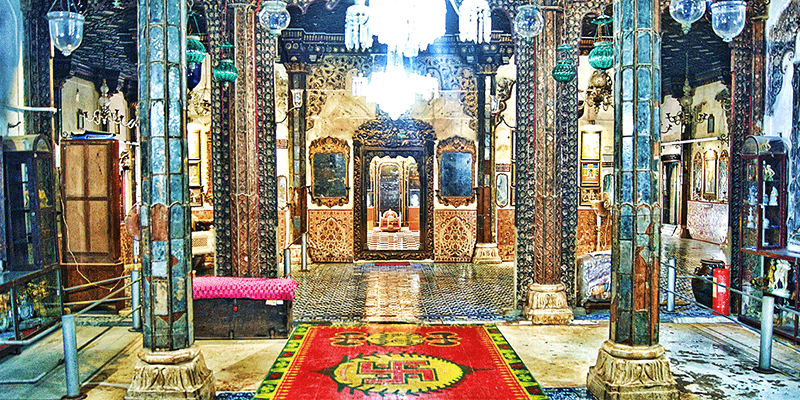 4) PRAG MAHAL, BHUJ – Prag Mahal is located adjacent to the Aaina Mahal . It is a palace built in artistic Italian Gothic style ,that might look bit off in this part of India than in some European countries.The Palace is made wholly of Italian marble and sandstone ,brought from Rajasthan. The most significant structure of the Prag mahal is it’s impressive 150fts high ,clock tower which can be seen from far off part of Bhuj town. Its main attraction is the grand Darbar hall in its center with high ceiling and adoring chandeliers .There are also several other old furnitures and weapons on display which can be worth paying a visit . 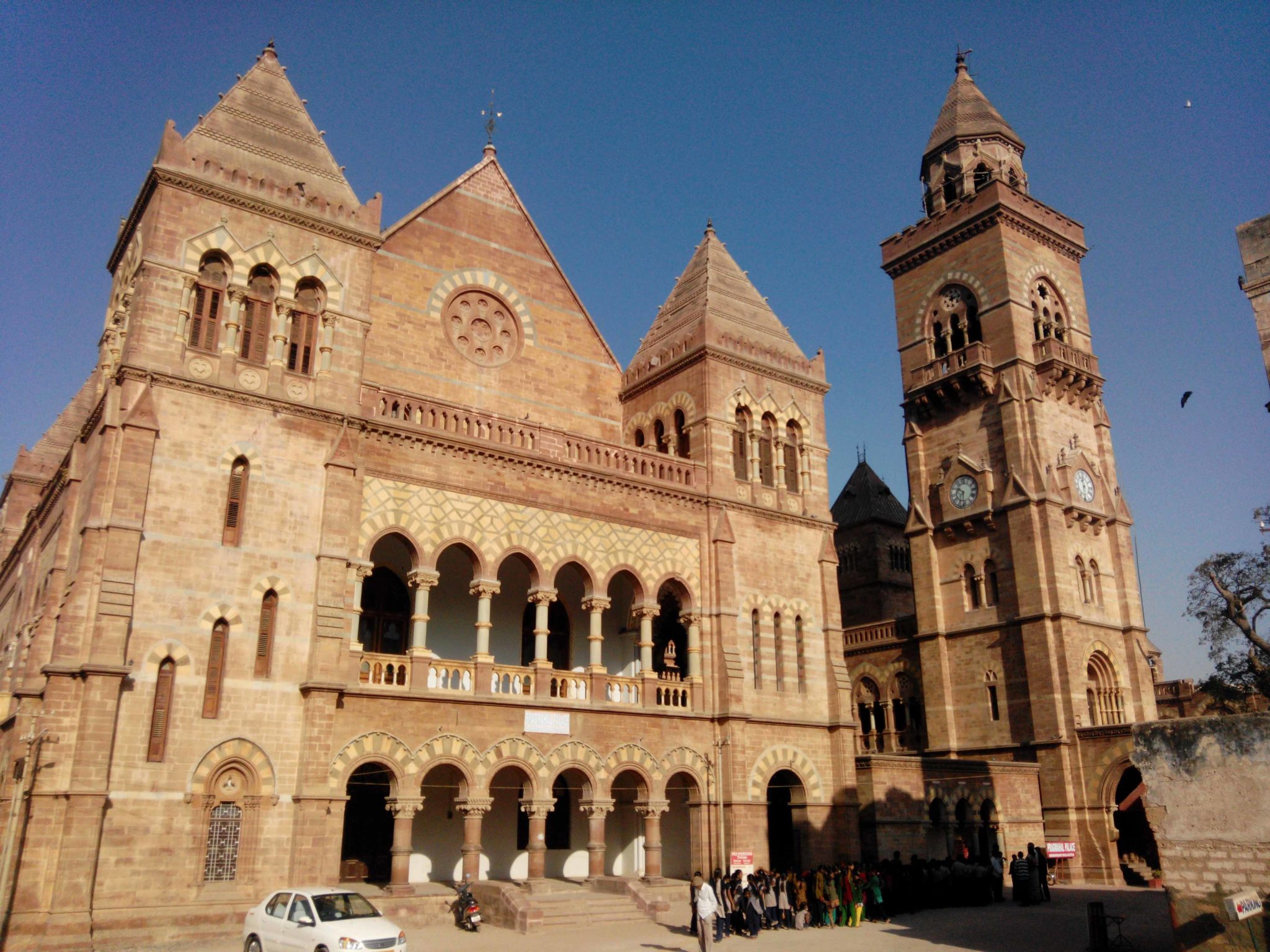 5) SIYOT CAVES, KUTCH – Siyot caves sometimes referred to as the Kateshwar Budhhist caves ,lies in the Lakhpat taluka of Kutch and is believed to be from 1st centuryAD. The cave consists of a Sanctum and a wayfare. If folklores are to be believed Siyot caves were part of the 80 monastic sites which were reported by a 7th century era ,Chinese traveler in his travel tales. It’s strong Buddhist link can be clearly revealed by its impressive ambulant and sanctum area .The main cave has an ambulatory ,an east facing sanctum and spaces which suggests presence of Shiva temple otherwise known as Kateshwar cave, dating back to 1st century AD. The cave were mainly used by Buddhists monks ,which were concluded based on the seals and the traces of Brahmi inscriptions on its walls. Rest of the caves are simple single cells which can be skipped . 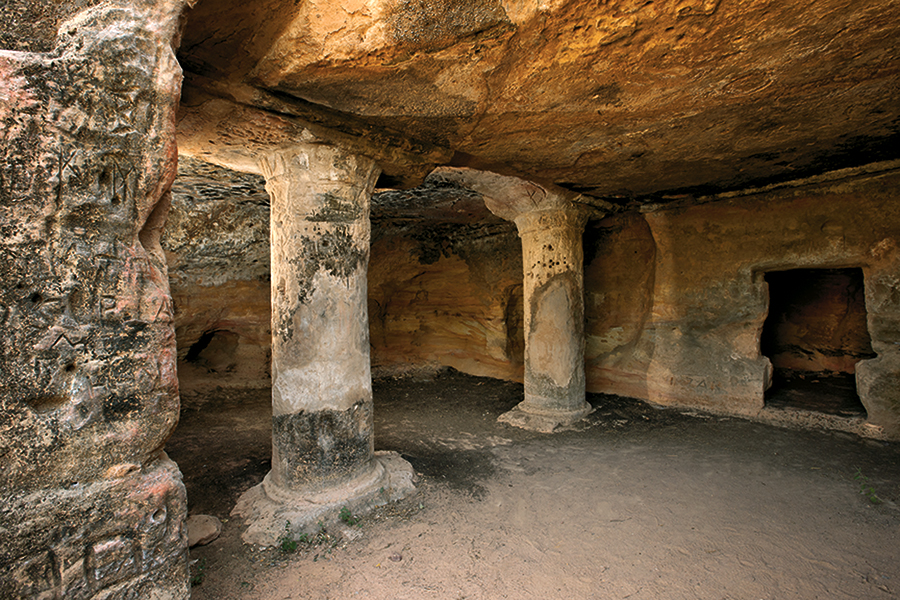 How to reach Sayot Caves

6) DHOLAVIRA, ANCIENT HARRAPPAN SITE- Nestled in Khadir Bet, a beautiful island in Kutch ,is an ancient site of harappan civilization .The archaeological excavations here have revealed an Indus Valley Civilization site and is considered to be among the largest metropolis of the Indus Valley Civilization. The Pre-historic site of Dholavira is believed to be as old as the Egyptian pyramids .The ruins displays remnants of planned townships with market place, paved streets, double floored brick houses and even a drainage system. Which points to a highly sophisticated urban culture that was way ahead of its time. 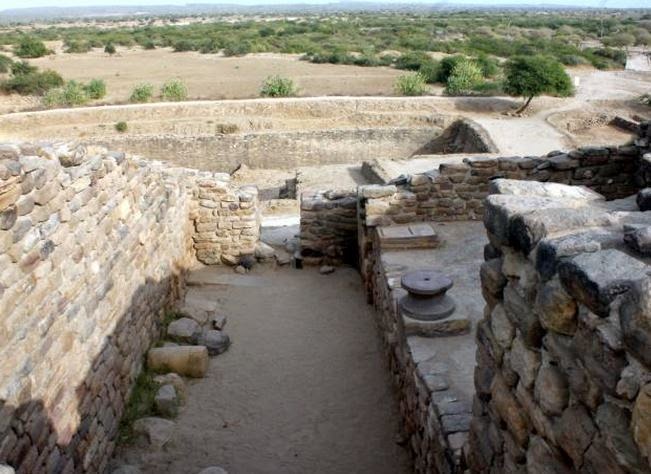 How to reach Dholavira

2. To find waypoint , click on the link to google maps here.

7) RANI KI VAN, STEPWELL OF PATAN – Rani ki vav is an intricately constructed stepwell situated in the town of Patan in Gujarat, India. The stepwell is said to have been constructed as a memorial by queen Udayamati around 1050 AD in the memory of her deceased king Bhimdev I of Solanki dynasty.The step-well is built as a grand seven-storied pavilion with the craftsmanship of the sculptures getting finer & more exquisite as one climbs down, each level. The architecture and carvings are magnificent and very beautiful. Each carving is carefully done and depicts Gods and Goddess, as well as poses of Apsaras, Nagakanyas, Yoginis etc.Now almost in ruins visitors are only allowed up to a certain floor. 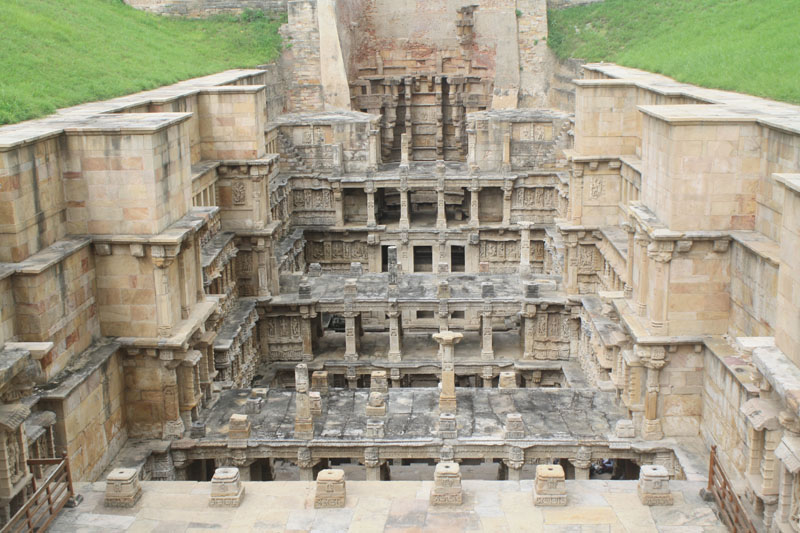 How to reach Rani ki Vav from Ahmedabad

8) HOLY CITY OF DWARKA – Dwarka or Mokshapuri is among the foremost saced pilgrimage site in the country .The reputation of Dwarka is mainly due to the identification of the modern city with the mythological sacred city of Dvārakā, believed to have been the first capital of Gujarat. Dwarka has got mentioned in the epic Mahabharata as well as the Shrimad Bhagavad Gita , Skand Purana , Vishnu Purana and the Harivamsha. It lies on the western shores of Okhamandal Peninsula on the right bank of the Gomti River and is renowned for the Dwarkadheesh temple. Every year during Janmashtami (the anniversary of Krishna’s birth), thousands of devotees from all over the world come here to partake in elaborate festivities. 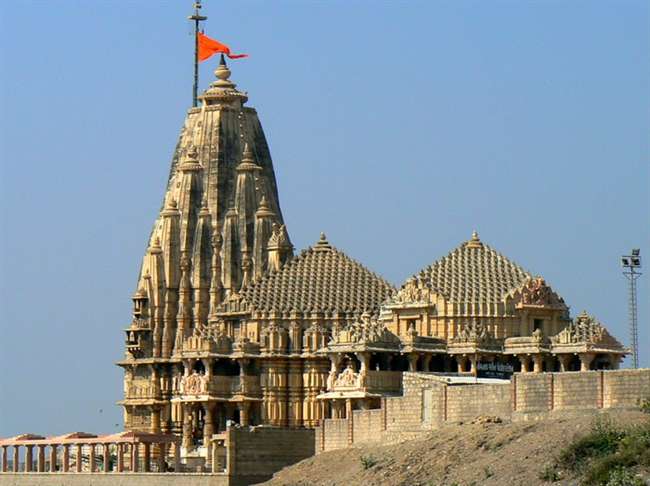 How to reach Dwarka from Ahmedabad

9) JUNAGADH It is located at the foot of the Girnar Hills and is just 320 km from the state capital of Ahmedabad . Junagadh means “Old Fort” as it used to be the erstwhile capital of the Nawabs of Junagadh . The only other name to Junagadh is Sorath .The city is an important city in perspective of tourism and pilgrimage  in Gujarat. The prime attraction of this city is the mountain of Girnar which is a volcanic origin of gigantic height which has rose steeply to a height of around 3600 feet. The mountain of Girnar is believed to be older than the Himalayas and is considered highly sacred to both Hindus and Jains. The Tomb of Nuri Shah ,Mahabat Maqkara and two multi-staired step wells are the other major attractions in Junagadh . 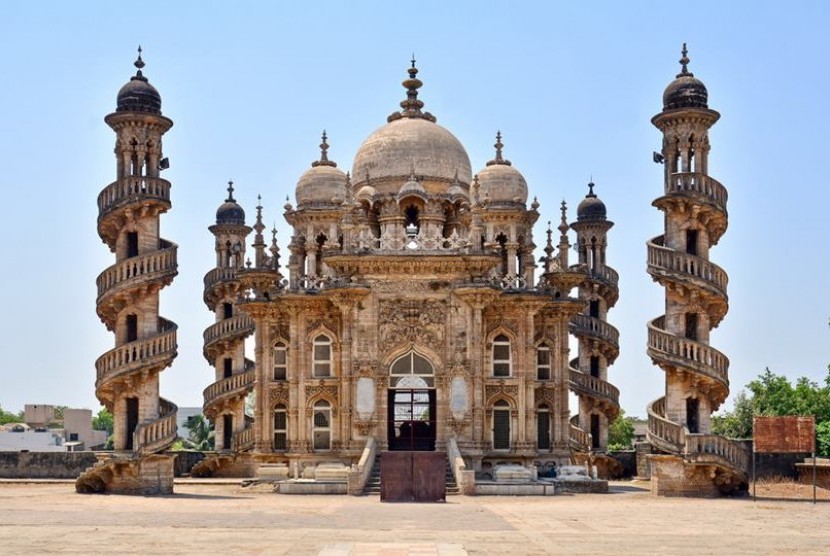 How to reach Junagad from Ahmedabad

10) CHAMPANER- It is a historical city located at a distance of just 47 km from the city of Vadodara. One of the most popular attractions here is the Pavagadh archeological park, which is also a UNESCO world heritage site. This historical city was founded in the 8th century by Vanraj Chavda of the Chavda dynasty. The heritage site is studded with some of the finest piece or architecturally wonderful forts with its bastions starting from the hills of Pavagadh and extending into the city. The Pavagadh park’s landscape includes many historically important archaeological sites . Some of its many cultural sites and hill fortress dates back to an early chalcolithic period .Placed amid an interesting location, a blend of mainly unexcavated historic, archaeological and cultural sites, the park comprises of wells, mosques, terraces, temples, walls, residencies, fortifications, water installations, agricultural set-ups etc. 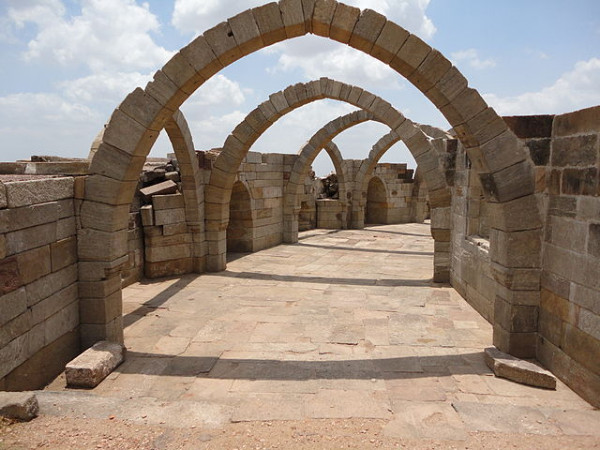 How to reach Champaner from Ahmedabad

11. SUN TEMPLE MODHERA – Situated on the bank of the river Pushpavati , Sun temple at Modhera is a 10th century ,Hindu temple dedicated to Sun god .It lies in the Modhera village of Mehsana District .This temples is now in ruins and contains the relics of times gone by. The temple complex and the magnificently sculpted kunds are highly regarded among the most prized jewels of architecture dating back to Solanki period .The stepwell complex with pyramid shaped steps forms some of the best intriguing geometric patterns you could see so as to reach the below water reservoir. One has to visit to best describe its beauty for which I am currently unable to find words. 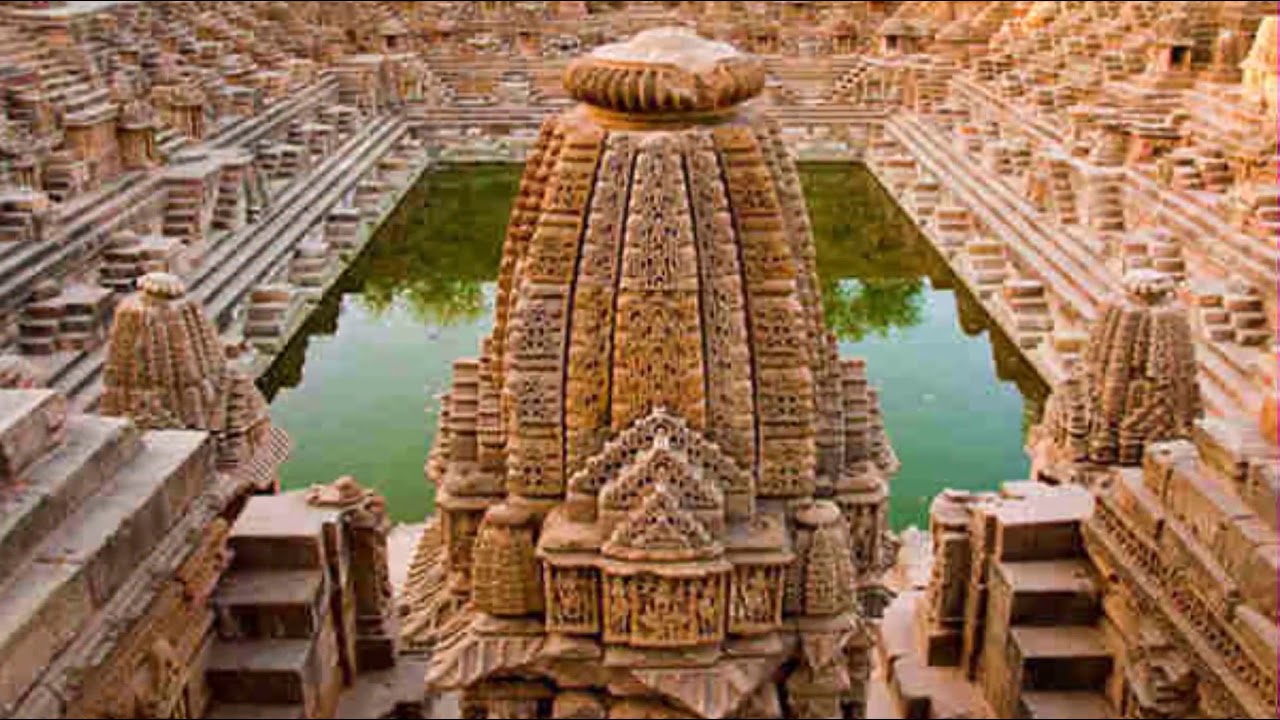 How to reach Sun Temple ,Modhera